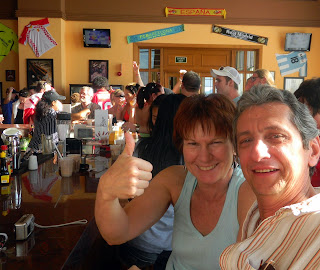 I woke up and, for a wee while, struggled to get out of bed. It seemed like a lot of work to find a bar, get a taxi and head out to where ever the game would be. But I decided not to let that get in the way of my last real experience here.

I got up, grabbed breakfast and blogged. I had also come up with a plan. Get some sun from 10 to 12, then ask at the service desk where would be the best place to see The Game. I figured probably a 10 min taxi ride or maybe a 45 min walk as I had heard earlier that a bar existed to the north, one that played the Olympics.

So I got my towel, my book, lathered up with lotion and headed out into the sun. There was a little dusting of clouds in the sky but it was otherwise a gorgeous day. I grabbed my chair and lay out in the sun until 12.

Then I went back to my room before heading to the lunch buffet. There, in the elevator, I met a nice older fellow who asked if I was seeing The Game. I said I had hoped to but still wasn’t sure of a nearby bar. He said that the hotel would be showing the game in the sport lounges and on the TV in our room.

Very good news. But was it true?

I went back down and confirmed, yes, yes indeed it was true. Oh frabjous day, Calooh Callay.

I ate and set up shop in the bar at 12:30. I want to say the beach had been emptied, that everyone in the hotel mobbed to the sports bar, but that was not the case. At 12:30, I was one of only 8 people there. Hmmm, I thought to myself, is this really going to happen?

I talked with one of the fellows who had arrived early and he still believed they would show The Game despite the fact that all TVs currently displayed a soccer game. By 1, same thing, only by now there were 15 people. Doubt began to creep into my doubting mind.

We struck up a conversation immediately, and, very much like Bruce and Lil, we hit it off like we were old friends. Plus, I may have been drunk.

Hey, there wasn’t anything else to do while I was waiting and the fruity drinks were very yummy!

Still, John and Leslie and I shared two very important things in common. They both loved to travel and, when I told them why my wife wasn’t with me, John told me he had survived throat cancer himself.

They told me all about their trips to Thailand and Costa Rica. They had been to many of the same places in Europe that Margot and I had been but they had even ferried over to Morocco to bravely wander the markets there. I didn’t talk too much about myself as semi-drunk Joe seems to be pretty good at getting others to talk about themselves. Margot was the same. She was such an amazing listener. I tried to channel a little of that.

Costa Rica sounds incredible, a place Margot would have loved. They also did a good job of talking up the East Coast of Canada and, of all things, Columbia.

I found it odd that I was able to talk about what happened to Margot with them. It could be that was because they knew a little of what it was like. John’s cancer had been found by accident – he thought he just had a cough. Likely had he not gone in when he did, it would have spread too far for them to deal with but go in he did and, after being hammered by radiation and chemo, his cancer was in remission. He was very grateful.

As we talked, the clock ticked down and still no sign of The Game. However, one of the four guys who had come in to watch the game took matters into his own hands. He was a superfit dude, probably thirty, with a cool set of tattoos up one of his arms. On his tricep was the word God in strong letters. Below that was a flag. Italy. On his forearm were more delicate letters. Famalia. Nice.

Anyway, he grabbed the remote from behind the bar and began the difficult process of figuring out where The Game would be on Mexican TV. To my surprise, he succeed. And, one by one, he switched all the TVs over to the right channel.

By 1:15, the skiers had finished. A picture of a hockey rink came into view. There were 30 odd people in the bar and more coming. My 5th drink was parked in front of me. My new friends sat back in their chairs. The Game was about to begin.

(picture is of John and Leslie, good people.)