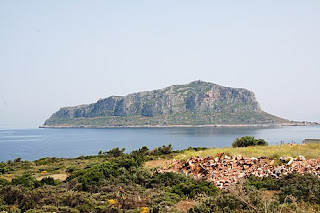 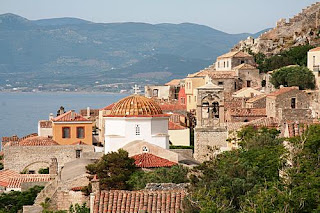 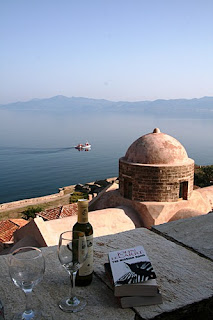 Good God! So far the Michelin map has been about 50/50 in Greece. Some roads they say are built. Some roads just plain don’t exist. Some lovely big red roads turn out to be unrailed, unmarked, potholed goat paths. And, sometimes, a white windy road that looks like hell has been upgraded.
Much to my great and utter happiness, this was the case. The road from Sparti to Momenvasia had two lanes, had enough room to pull over if a fast car wanted to pass or room for granny-me to burn out first gear passing a big-ass truck. The countryside was bleaker than the north had been, many trees still scorched and little green grass or lovely purple plants.
But when we pulled up to the causeway leading to Momenvasia (M: described as the Gibraltar of Greece since it was a big hunk of rock attached to the mainland by a causeway, with a fortress on top to defend the seas in times past), we couldn’t believe that it had taken us only 2 hours. We’d planned for 4. We drove across the causeway meant for one car, dodged the ten cars already on it and heading right for us, and made our way up a steep street lined with parked cars, hoping that, at the end, we would find Momenvasia.
And that we did. A walled town. Free of traffic. Protected by the UN (no blue helmeted troops with guns though). There was a place to turn around and, could it be, could it possibly be, a place to park that wasn’t ten miles down the frigging steep street?
Oh glorious luck, there was a parking space. About twenty from the wall. We snagged it before someone had realized their mistake and walked up into the town (M: totally invisible from the town. In fact, it looks like the only thing here was the fortress on top with a curtain wall running down into the sea. A whole different world opened up to us once we’d passed through the L-shaped gateway).
Small shops lined the narrow, cobble-stoned street. It reminded me a bit of Rhodes, only here, the shopkeepers didn’t hawk as we went by. They continued to play backgammon or sit in the shade and chat with their neighbours. Very civilized. Along the way we saw the usual postcard and trinket shops, one selling local wine, one pounding out disco music and offering all manner of icy fruit drinks. We found our hotel, but that turned out to be the hotel ‘office’. The nice lady led us farther along the ‘main’ street until we came to the proper hotel. A good 200 meters at least from the commercial zone.
We were given a choice of rooms but, in reality, there was no choice. At the top, watch your head please, low beam, there was a huge room with such a view over the town and the ocean and right next to the veranda. It had a fireplace, not useful, perhaps, but very pretty and a huge comfy bed. (M: It had the same feel as our Rhodes room – Byzantine/Turk exotic – but about 5 times the size). We took it and damn the price. 90 euros. Momenvasia looked to be one amazing place and we wanted to get the most out of it.
We unpacked, watched Jerry McGuire (I know, I know, how sad but there you have it), then sat outside on the veranda in the shade. Small fishing boats chugged almost silently in the mirror-smooth water below us. People strolled along the seawall. Birds chirped from their nests underneath the terracotta roofs. A giant and partially restored church dome sat at nearly eye level and, far behind us, the great frigging castle loomed. There was absolutely no sound of traffic or construction. It is paradise.
We read a bit, looked at the fishing boats puttering by, watched the sun go down (M: and I polished off half a bottle of wine) and thought, holy crap, this place is soooo nice. It had been one of those sites you look at in a guidebook and think, hmmm, it is really worth the drive? Well, let me tell you it sure as hell was. Probably the nicest place in Greece outside of the Santorini resort.
We had supper overlooking the sea and yet another church roof. This time we tried a local rose instead of white. M had meat balls or what are better described as meat tubes (I know how rude that sounds). Appetizer was Aubergine Imam, sauted eggplant and onion and olive oil and a bit of tomato. I had spaghetti. Again, good food, good portions.
Lots of cats slithered around us in search of food. Not many of them looked too well and we felt bad we couldn’t feed them for starting a frenzy. A german family gave them pieces of bread but only the toughest cats got them, the others got nothing. Still, the moon was out, nearly full, and sparkled on the water like ice crystals and we were very happy. What a great place.
Too bad we only had one day here. If anyone asks, spend two days here. At least. It is Greece without all the noise and confusion. It is paradise.