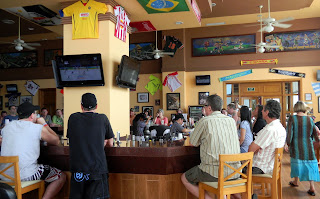 I have to say, I was pretty excited about The Game (and so very happy I didn’t have to go far to see it.) John and Leslie, however, had begun to outpace me on the drinking front. While I had a good head start, they quickly caught up but none of us were a match for a little Chinese girl who tanked down some sort of chocolate drink like it was a milkshake (you can see her later on top of the bar, cheering).

The puck was dropped, the bar cheered and The Game had begun. Not the best picture but what the hell. We all watched as Canada fought valiantly against the foul and sometimes dirty Americans. A few American supporters here chanted U-S-A but by far the majority of the crowd was Canadian. The Canadians sang hey-hey, goodbye, they chanted Can-A-Da and pounded on the table or clapped with surprisingly un-Canadian gusto.

It was amazing. The energy. The patriotism. The shouting. The fruity drinks.

Then, in the middle of the game, the Mexican station decided to take a commercial break. I kid you not. They didn’t wait for a stoppage in play, while the puck was being collected or coaches were talking to their players, no, they just cut to Telcel.

Had the Mexicans never seen a hockey game before?

It was weird but I didn’t worry, not much was likely to happen. I mean what are the chances Canada would score its first goal in those 30 seconds?

While we all watched sexy girls holding cellphones, Canada scored their first goal.

Ever seen a bar erupt in anger? Frustration?

Me neither until today but that’s what happened. Holy hell, people jumped out of their seats, they threw things, they yelled obscenities and then a replay happened and it was like a baby getting the boob, everyone calmed down. Then they cheered.

The first period ended and when I looked around, the bar was nearly full. Many more had crept in while we watched the Game. I would guess the beaches were now empty. The new arrivals to the hotel had chosen to come here rather than go to their rooms and unpack.

Everyone stared at the screen, hoping and praying. It had been a great game so far. Both sides had chances, both goalies played well and I couldn’t help feeling a one goal lead was not going to be enough.

During the first intermission, two (shall we say, no longer young) women decided to get their picture taken with a young dude who, at the risk of sounding gay, had a great body. They took pictures of each other biting his nipples. I shit you not. If one was under 40, I would be surprised. I think he too was surprised and not quite sure how to react. I looked over to John and Leslie and we shook our heads.

As more people continued to arrive, we all watched and cheered Canada through 2 more periods, and as the last minute began to count down, the US having pulled their goalie, the crowd chanted and cheered and roared and with anticipation of a gold medal.
50 seconds.
40 seconds.
The noise grew.
People were out of their seats.
I grabbed my camera and began to record what would likely be the winning moment, the last 30 seconds.

Then the US scored.

Even the Americans were stunned and didn’t start shouting USA at the top of their lungs for maybe 3 seconds. The Canadians stood in stunned silence. SHOCKED.

So much for me filming of us winning. I had recorded a room mostly full of shocked and silent Canadians (and a few cheering Americans.) I feared I had jinxed it.

Then the OT began and the noise rose once more as we all cheered on our team (could you hear us?) It was thunderous.

And then Canada scored.

The place went crazy. People leapt onto the bar or on their stools. There were hugs and high fives and dancing and cheering and then we all began to sing o-canada at the top of our lungs.

Ok, sure, not all of us knew the words but we hummed the hard bits with great pride.

anada had won! On a Sidney Crosby goal!

It was all I had hoped it would be and more.

Afterwards John and Leslie invited me to dinner with them, my first invitation, but I had to decline as I was pretty much socially exhausted. Introverts like me can only take so much before they need to recharge.