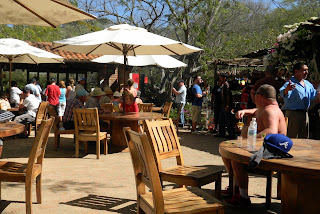 When we landed on the last platform, we found, a little to our shock, that there were no ladders down, no stairs, no elevators or escalators. We would have to rappel down.

Jonathon-the-operator showed us what would happen, something about a figure 8 clip and someone holding the rope below and it was all safe and I swear, the 3 indo-canadian girls went as white as me. We all shifted nervously on the platform as the first one leapt off and, after a scream, landed without any problem. Must have been 40 feet. Looks far down from up top, not so far from the bottom.

The fearless guy was, yes, fearless. His girlfriend, brave. The goofs didn’t do anything goofy and the indo-Canadian girls were happy to go last, making sure no one died a hideous, shrieking death. I had no fear and rode down easily. I don’t think I would have been so unafraid if I had gone first but seeing how easy it really was, I managed to get down without shrieking.

When everyone was down safely, we sat in the sun for a bit then off to the factory. We marched through the sweltering heat past the more clever locals who sat in the shade, past guava farms which has the most amazing smell, our feet kicking up dust from the dry pathway. We got back on the bus and drove off to the factory.

It was a small factory, and the tour took very little time. Over here, the ‘pineapples’, the guava plants cut into round shapes, over there, the pulping, over here the fermenting, how stinky, over there the distilling, the aging, the bottling, all very hi-tech amigos, we do it by hand.

I was pretty bored, to be honest, and somewhere along that bus trip to the factory, my mood had shifted. I had gotten a little sad over Margot not being here and that turned into an utter intolerance of the world and everything in it.

Margot would have loved the tour, I’m sure, and asked all sorts of cool questions at the end and even loved the cheesy singer in front of the bar where they dispensed free tequila. I did not. Instead of cool and, like the bus, very Mexican, I saw only the poor mules who sweated in the heat and the vendors hawking their wares with wanton aggressiveness and the stupid kids who thought it was very cool to drink 6 shots of tequila (ages 15-18, there were 5 of them).

The no-neck guy shouted on about how great booze was in Canada (again, it might be true so dunno why him shouting it bugged me so much), the parents of the drinking kids did fuck all but bathe in the sun and there was a knot of people who kept talking throughout the whole tour of the factory (yes, you guessed it, fucking no-neck guy and his moronic clan of loudmouths.)

I got myself one drink and it was pretty darned good, considering I am not a big tequila drinker. It was smooth, didn’t make my throat burn or my eyes water. It was a gold medal winner. Double gold, in fact, and a completely organic drink. No preservatives. No chemicals in the process, all natural. Margot would have liked that.

Unfortunately, by the time I got back on the bus, I was in a horrible mood. What made it worse were the kids in the back of the bus, not far from me. To all parents out there, let me tell you the number of tequila shots your teenager takes is directly related the number of times he or she will tell you to shut up or fuck off on the bus ride home.

OMG they were such a pain in the ass, drunk and loud and suck-my-balls this and fuck-you that… and that was just the girls. At first, they all sat laughing, then they turned on each other and nearly came to blows, then when mom intervened, see the fuck you, comment. Ugly, ugly stuff and the parents did bugger all, (including the no-neck guy who had 2 kids back there and who I had thought would put a stop to all of that pretty quick, but no, he thought it was pretty funny when the son told him mom to fuck off.)

As well, my Mexican friend had apparently 12, yes 12, shots of tequila and if I thought he was chatty before, holy shit, I had no idea. He didn’t sit beside me but across the aisle and kept leaning over to say things to me. Sometimes he’d turn around and talk to the teenagers like they were his new best friends. Oddly, they seemed to like it. If I understood him right and he did his best to gesture as well as speak to me, he got loaded before getting on the bus and then got extra loaded at the factory. Dunno if he ever did the zip lines, I honestly don’t recall seeing him there at all.

It was a long ride back.

Strangely, when I got up to leave the bus, my amigo got up and shook my hand and patted me on the shoulder and smiled and fired away more machine-gun spanish. Somehow, I had made a friend. A drunked non-english speaking friend but beggars can’t be choosers.

By the time I walked into my resort, I had a huge headache, (due to the bus ride? The lack of water? The lack of food? The tequila?), my mood was truly foul and had degenerated into a seething hatred for most, if not all, people, and I felt vaguely sick to my stomach.

Grabbed some food and my anger turned to sadness once again and I lost all interest in writing the blog or going for supper later or doing anything. I went back upstairs and sank into bed and didn’t get out until morning.

The day had started well but ended poorly. Funny how a day can turn around in my current state.

Tomorrow, I had to catch up on the blog and beat back the tide of unhappiness.

(the picture is of the bar at the tequila factory and includes the drinking teens and my favourite guy, no neck. See what I mean, no neck, right?)