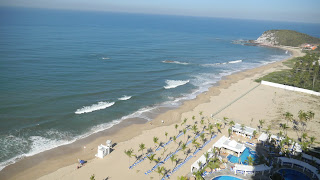 When I woke up, I did something I don’t normally do. I turned on the news. And what did I see?

A earthquake in Chile and a tsunami warning for the pacific coast. It looked like a bad earthquake, 8.8 and they projected surge waters 7-18 feet. Good god.

Funny how of all the days here, this was the one when I turned on the news.

I watched the news to see when I should be worried or IF I should be worried. There was some talk of wavings hitting California at 12:08pm and a neat diagram showing how far the wave would travel from the epicentre in X hours. It would hit my area about 5 hours from the Chile but when did it start in Chile, local time, GMT, what?

I went downstairs and looked up on the internet, did GMT calculations and figured the wave, if there was one, would arrive at 10:49 my time. I went to the desk and asked about the tsunami and they seemed blithely unconcerned. “We have been told that the surge will not reach us.”

Not that I doubted them. No, these were the guys who only took 9 calls to figure out a laundry order. I’m sure they had a handle on the tsunami.

I went upstairs, packed an emergency bag, put in 2 bottles of water, gathered all my documents and prepared to leave quickly, if I had to.

Then I went outside to watch. The beach continued to fill with people as the morning passed. Fuck me, I thought, if the resort got it wrong, a lot of people, children, golden retrievers would be dragged into the sea.

Good photo opportunity, sure, but something I was not even sure I could shoot if it happened. Can you imagine watching a wave come in a kill dozens of people?

I kept an eye on my watch, kept an eye out for someone running out and yelling IN-COMING! I kept the news on but they were pretty much useless at tracking the tsunami in this part of the world. Oh, CNN had a 30 second watch on Hawaii but nothing about their southern neighbour.

But, thankfully, at 10:49, no big sucking back of the sea, no rising of the ocean like a great fist, no surge and counter surge. The threat had passed.

I thought I would have been pretty safe up high on the 18th floor. But man, all those people down below, not so much.

Still, great that nothing happened. I celebrated by going down and having a beer at 12 – after I was sure nothing was going to happen. I generally don’t drink at all before noon, hell before 6, simply because it makes me sleepy. Middle-age, eh?

Boring, yes? Sorry about that. A good story would be leading towards a final great event. I don’t think that’s going to be the case here. The big event was the zip line.

Or was it? Margot would always point out that not every story had to have great battles or gunfire or zipping through trees. Maybe it’s more about that I can go down and do supper alone every night. Even tonight when all my instincts wanted me to stay in the room and avoid the empty chair and table-for-one crap. Maybe it’s about trying to find a way to live when half of your soul is gone. Maybe it’s regaining faith in something. A purpose.

Not sure I’ve managed to do any of those things, though. Not sure I even feel any better than when I left. A bit more burned on the knees perhaps. But better, sure doesn’t feel like it.

However, tomorrow is another day.

At the very least, I have to find a way to see the game, US vs Canada.

(the picture is the tsunami… or at least what hit us.)