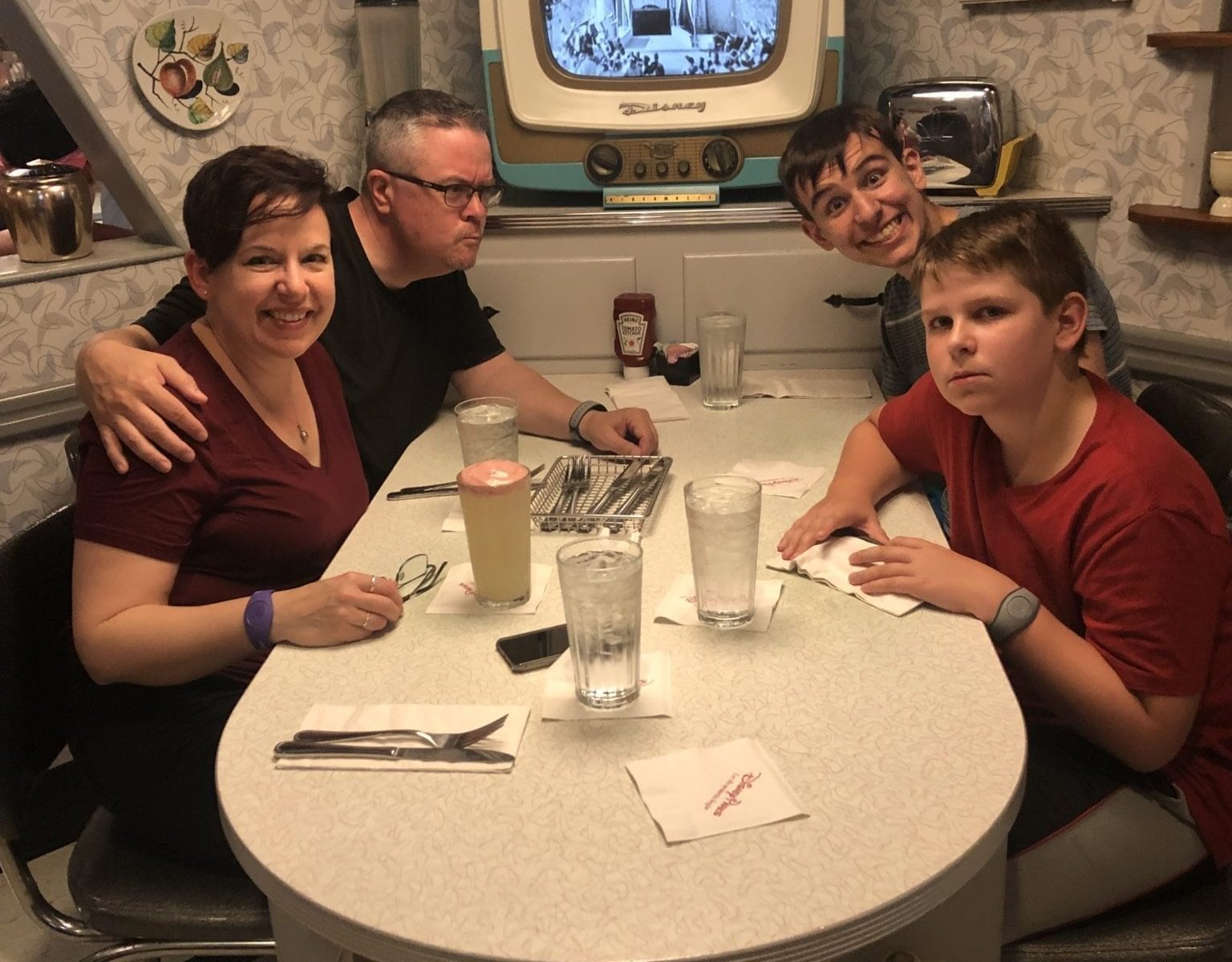 We still had a lot to see and do at Hollywood Studios (Slinky dog ride, watch the Star Wars show and maybe sneak into the 50’s Prime Time Diner, then see the Fantasorgasmic Show.)

None of us napped back at our Disney World resort, but we did get off our feet for a few hours, me writing, the boyz watching YouTubes, and The-Prettiest-Girl-in-the-World doing laundry.

The whole laundry thing became absolutely necessary due to us going through at least 2 sets of clothes a day. I mean, who wants to put on a sweaty, suntan-lotionie shirt, again? Or slip into a used pair of underwear after a shower?

With our clothes restocked, our bodies mostly rested, we bussed our way back to Hollywood Studios, again. About 5. We’d planned to eat at the resort, but the bus was right there! Right there!

So we lept on it.

For once, we’d be early. We’d get a chance to see the Star Wars show, grab some food at Hollywood Studios, hit up our fast pass ride, The Slinky Dog, and see the evening show.

It was a good plan.

So we decided to ask if my #1 Disney-World-Bucket-list restaurant could squeeze us in. The 50’s Prime Time Diner – A place where they made sure you had good table manners and called you out for not eating your veggies.

To my surprise, they had room!

I was super excited.

We wandered around in living rooms with old TVs, old kitchens, and stood near a 50’s bar serving drinks with flashing ice cubes. Each room had all sorts of 50’s memorabilia that I basically remembered from my childhood (though that was in the 60s, lots of our furniture and stuff was definitely from the 50s.)

We were called to our table by a woman with a mom-voice, you know the type – she could yell dinner and you heard her 4 blocks away in an underground bunker with music playing. She sat us down, gave us menus and told the kids to behave.

The table had a TV, a cool old toaster and was, of course, all chromie. Our waiter was called Uncle Chris. He reminded us not to put our elbows on the table. I had a very hard time with this as my elbows are no longer well-trained.

I ordered mom’s pot roast. I mean, it was mom’s! The Prettiest-Girl-in-the-World ordered ribs, The-Youngest got a Caesar salad, and The-Oldest went with Cousin Megan’s Traditional Meatloaf.

I was so excited. So nostalgic. This was the height of white male dominance, a time when a house cost $8,400 and your salary was $3,200. A new corvette cost $1,500. A razor 25cents. Even though I hadn’t lived through the time, so much of what was on display was a part of my childhood.

We watched clips of I Love Lucy, of Reagan introducing Walt Disney, of the original Mouseketeers, and of Car 54 Where Are You? Just to name a few.

But then things started to go pear-shaped, in a way I hadn’t anticipated. Uncle Chris came by often to give the boys a hard time. “Don’t talk with your mouth full.” “Sit up straight.” “No phones at the table.” That kind of thing. All in good fun. Really.

He called The-Prettiest-Girl-in-the-World ‘Peggy Sue’, The-Youngest, “Spanky”, and The-Oldest, “Trouble.” All in fun.

The-Youngest, however, didn’t really like Uncle Chris much. The guy may have pushed the whole 50’s thing too far, and The-Youngest no longer had fun. In fact, the opposite of fun.

It took a while to calm The-Youngest down, but eventually, he did, and he made sure to clean his plate (and keep his elbows off the table). The-Oldest however, did not eat his beans, so when Uncle Chris came around, he took the plate and shouted for the whole restaurant, “Do we waste food?” “NO!” they all shouted back. The-Oldest laughed along with it all. He even laughed when Uncle Chris brought back the beans covered in whipped cream “for dessert”.

He didn’t eat them, though.

For the rest of the entire meal, The-Youngest lived in fear of Uncle Chris coming by and yelling at him. He realized how easy-going we are in this modern age and he vowed never to go in time to the 50s. Ever. I don’t know if Uncle Chris crossed a line, but it made the experience less fun for sure.

Full, the dinner almost spoiled by a little too much ribbing, we looked outside.

That weather forecast of showers, lightning, and thunder was coming true.

We had one ride to do, one show to see, and the Fantasmic Light Show.