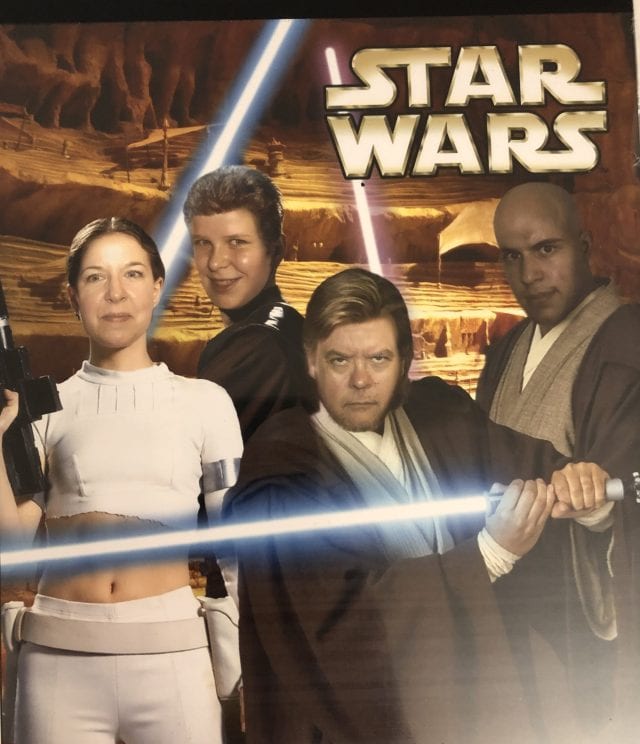 No question about it, the best way to do Disney World is to embrace your inner child. A lot easier if you’re, you know, a child, but we all did it.

It took us until after the Rocking Rollercoaster to realize what kind of day we were going to have at Disney World. It was going to be a nerdy, goofy, silly day.

And that was awesome!

It really started with The-Prettiest-Girl-in-the-World LOVING the Muppet Show. It’s not an adult thing to be so excited by a show like that, but tapping into your inner kid, it’s totally fun. Seriously.

Then there was our quest to find a Kermit stuffy with a hole in his bum (where you stick your hand.)

Kinda goofy, sure, but it’s fun to embrace your inner child.

But when the boyz came out of the Rocking Rollercoaster looking like they’d seen war or grandpa’s naked butt, we decided to do something so goofy and silly, it would cement the day as a legendary goober day.

We had our faces photoshopped as Star Wars characters.

The-Youngest was the first to go forward and we laughed and laughed as his face replaced the emperor’s or Darth Vadar or Luke Skywalker. He even wanted to be Princess Leia, but The-Prettiest-Girl-in-the-World claimed that option.

See, at this moment, we really began to embrace the spirit of Disney World. Put aside being an adult and be a silly kid.

When it came time for The-Oldest, they photoshopped his face onto Mace Windu, changing his normally white skin to black. I laughed as he made evil faces for the evil characters, and weird, I-look-drunk faces for the good guys.

Then The-Prettiest-Girl-in-the-World went up and I have to say, rocked the whole Padme /Leia look. Like totally rocked it. I think I got a little excited in a very adult way.

And then I went up, and tried to look my most Jedi-ish. I ended up looking constipated but whatever. The family, watching me, laughed until they doubled over.

The picture we chose is here. See what I mean by a cool picture??? There’s a hot Padme, an amazing Mace Windu, a serious looking Obi and a slightly insane looking Anakin.

Giggling, we left, The-Youngest giving us a second by second recounting of the Rockin’ Rollercoaster. We tried to eat at the SciFi Restaurant, but by now, we were about 45 minutes behind schedule so we arrived at the peak lunch period. We settled for eating at the ABC commissary. Not good food, but filling.

Having embraced the day of silliness, we searched the app for a ride to do. Being out of sync with the day, we missed the Star Wars show, but I did manage to see Rey walk by and I’m pretty sure she smiled at me. Yes, just at me. Similarly, The-Youngest was pretty sure Darth Vadar pointed at him and called him to the Dark Side. Little did Vadar know, but The-Youngest had gone there long ago.

With lineups at the 120 min mark, the heat oppressive and no fast passes until 7:45, we returned to the bus. I offered to take The-Youngest to a Disney World waterpark, but after thinking about it for most of the morning, he declined. Even at 12, he knew he needed some rest.

In hindsight, that should have been a sign of things to come.