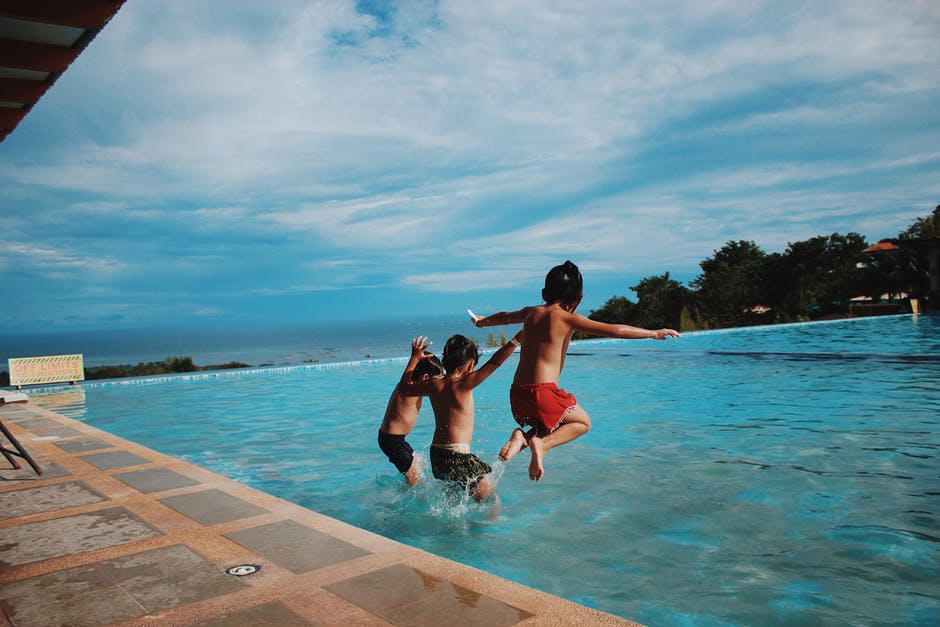 A week has passed. It’s time to see if the boys can swim, if they’ve passed their tests. The youngest, as always, is pretty sure he passed, but he’s also pretty sure he should be teaching swimming to the other kids. The oldest is confident, but not cocky. He knows that he wants to get out of the kiddie pool and get out fast.

We sit with the other parents, one reading beside a mountain of towels. In front of us is a pool of cute.  Who knew there was such a thing, but they’ve built the kiddie pool to look a bit like a beach. One end is basically 4” of water that slopes to a terrifying 4’ of water at the far end. Closest to us is an adorable little girl trying to climb on a soft swimming board. It’s like trying to climb onto a wet sandwich and float away on it. I would find it amazingly frustrating, but she’s giggling and having a great time.

Farther away, a huge man with the most intricate tree tattoo on his back I’ve ever seen is holding his tiny daughter like someone holding an apple for all to see. He kneels, dips his little girl in the water, just the toes, then her legs. She doesn’t cry. Maybe it’s like a big bath to her. Then her dad submerges her up to her neck. She giggles and slaps the water. I wonder when we learn to be afraid of water. I had a huge problem when I first tried to swim. Little, wee kidlings unable to walk, don’t seem to have that.

But we’re not here for cute. We’re here to watch the boys.

The Prettiest-girl-in-the-world and I are super happy to see that the youngest has come so far! He no longer dog-paddles his way to the bottom on the pool and half-drowns himself. He can now paddle like a poodle. Sure there’s a lot of splashing, but he’s staying afloat. Same when he goes onto his back. He forms his mouth like a great funnel and there’s a vague look of panic on his face, but, again, he doesn’t sink.

And he’s proud of himself. You can see that. He’s proud to show us what he can do. Sadly, he also proud to show us how well he splashes the other kids and nearly kicks a little kid in the face while using his legs and holding on the edge. But it’s clear he’s made progress.

The oldest is on a mission. You can see it in his face. He WILL pass and he WILL NOT be stuck in a pool with half a dozen 5-6 year old girls who giggle too much, who cry at odd times and who seem to love to splash more than swim.

And it shows. He looks good with his strokes, swimming not quite straight, but with confidence. He’s learned to put his head down, swim a few feet, pop his head to the side to gulp in a breath while continuing swimming.

Likewise, he’s confident on his back. There’s no panic on his face. He glides along like an otter that likes to splash a lot.

The instructor basically ignores him. The oldest’s clearly better than the level that he’s at, but rules are rules and he needs to pass this level to move on. And move on he does. I think he’s proud of what he’s accomplished, too, even if the look he gives us is more, Ha, THERE! DONE DAT!

In the end, they both move on.

The Prettiest-girl-in-the-world and I are proud of them. The youngest goes to celebrate on the slide, and yes, he slides face first, on his stomach, with his arms at his side. Cuz that’s how he rolls. The oldest goes to sit in the hot pool with the other adults and think deep thoughts.

We read the report cards then sign them up for their next lessons.

They didn’t win any gold medals in swimming (yet), but they’re learning a vital skill. Everyone needs to learn to swim. It’s part of growing up.

I’m happy to have been a very small part of that.