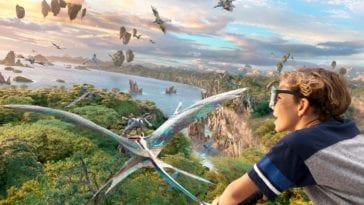 Like I mentioned in the previous blog, I’m not easily surprised these days, but the Avatar: Flight of Passage ride sure surprised me.

I don’t think I’ve had so much fun on a ride in a long time.

See, not only did Disney World do everything right getting me to the ride, but once we put on our 3D VR glasses, and the launch bay doors opened, we were taken into a whole new world.

On the backs of our mount, called a Banshee, we plummeted into a world filled with other flying beasts, other beautiful creatures, towards floating rocks and amazing colors in the sky.

Smells hit us as we passed into a cave, a musty, moldy smell.

As the bike vibrated between our legs, like a breathing thing, we zoomed through more caverns, around trees, fought our way past some sort of angry Banshee, and then soared towards the open skies. We flew over rivers and above exotic animals, through multi-colored forests, over sparkling seas.

With each dive, I whooped like a little kid.

With each climb upwards, I looked around in amazement, muttering, “Wow.”

With each turn, I felt the wind and smelled the trees.

Too soon, the ride came to an end.

I wanted to be in that world, be on the back of that Banshee forever. I wanted to soar in the clouds, again, and feel the closeness of the floating islands as we rocketed around them.

But the Avatar: Flight of Passage was over.

I got off, giddy with excitement. The ride, however, would not let The-Prettiest-Girl-in-the-World go. As we all climbed off our ‘bikes,’ the restraints failed to uncouple on hers.

Now, me, I would have loved this. I’d be able to go on the ride again and again and again, and be totally happy with that, forever locked into that world, but The-Prettiest-Girl-in-the-World began to get a panicky look on her face.

I raced to the exit to grab a cast member to help her out, but just as I was about to drag one in, the ride released The-Prettiest-Girl-in-the-World and she ran past me like someone had told her the Rock was shirtless in the next room.

Despite that glitch, we all enjoyed the ride, me most of all.

It wasn’t that it hadn’t been done before (Star Tours basically did the same thing without the 3D VR glasses) but it was the combination of everything from the whole Pandoran world we had gone through to get to the ride, to the attention to the smallest details in the line-up, to the decontamination room, to the sounds and sights, and, yes, smells of the actual ride.

Avatar: Flight of Passage was the complete package.

5 stars out of 5, and just because of the vibrating between my legs.

Below is what we saw, but not quite what we experienced. Not my video, but credits are in here.