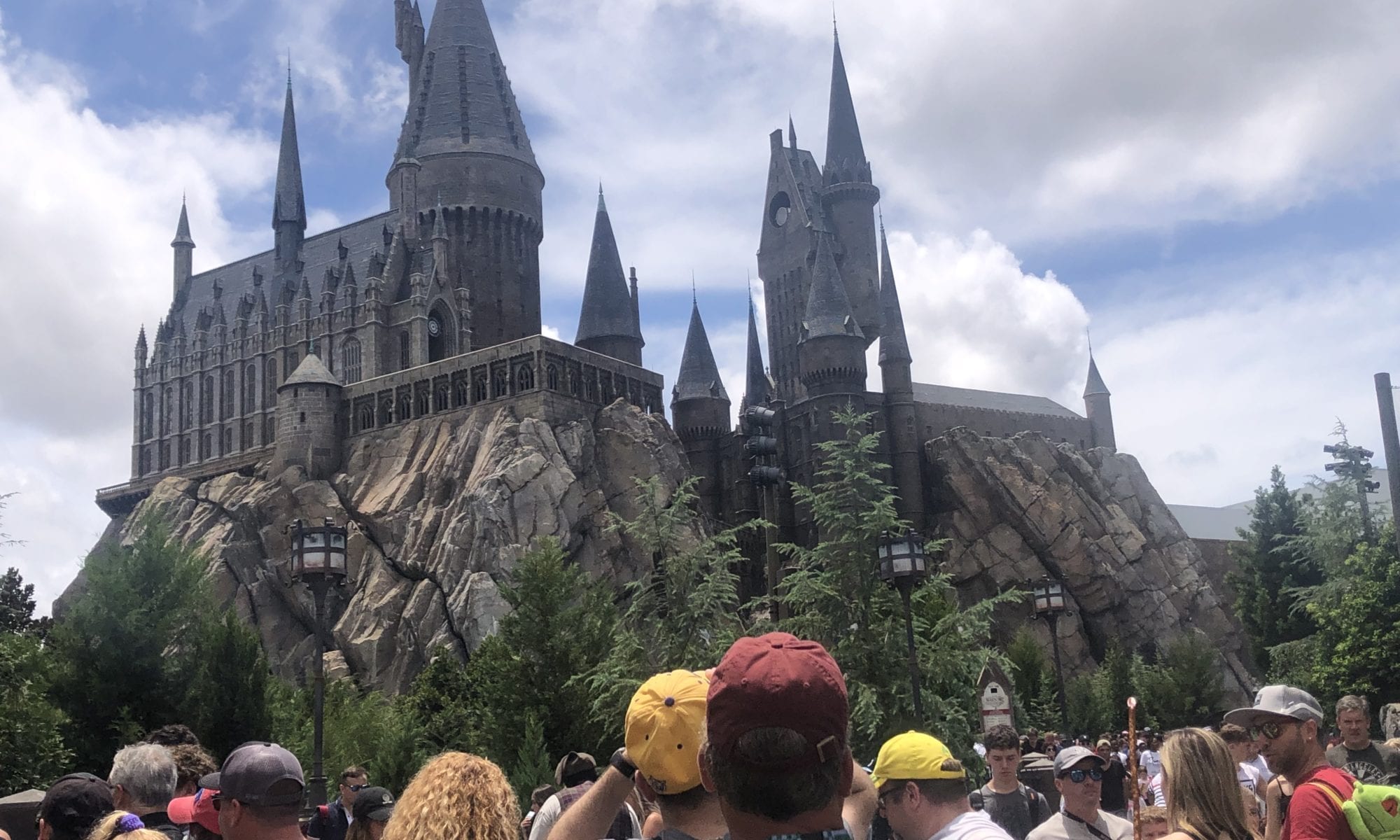 With my tummy full of Butter Beer, my skin warmed by Dragon’s breath, and my nerdy gauge filled up with magic, we left Diagon Alley to take the Hogwarts Express Train to Hogsmead, AKA, the 2nd part of the Wizarding World of Harry Potter at Universal Theme Park.

The Hogwarts Express is a ride itself, and we boarded with little wait. Inside, we were locked in our cabins while the Potter gang wandered in the corridor and Dementors flew by our window, feeding on our happiness (which I think they do on a daily basis for me).

I could see why this could be terrifying to young kids (being locked in a small room and then have the spooky, ghost-like Dementors wail outside the window), but for us, it was just fun.

Hungry, the lines now HUGE for most rides, the weather blazing hot and stiflingly humid, we chose to eat. That took a good 40 min of sweating in the Leaky Cauldron’s line-up, but the food was delicious, (all very British with fish and chips, toad in the hole and cottage pie!) Set in a medieval setting, we sat at wooden picnic tables and ate our fill.

Recharged and re-energized, we strode back into the crowds as thick as Mrs. Dursley’s Pudding. The-Boyz went on Flight of the Hippogriff, while The-Prettiest-Girl-in-the-World and I tried to shop for something special.

However, the crowds inside the stores, and bumping against sweaty muggles made it hard to fondle things like a Gryffindor House scarf, a Howler pop-up card or a Sorting Hat, so we left to find what shade we could and wait.

See, the thing that both Disney World and Universal don’t seem to understand is that it’s hot outside and we muggles need shade. Or AC.

Waiting for the young wizards to finish rides in the sweltering sun is not fun – It’s draining and uncomfortable and I’m pretty sure I end up smelling like a homeless hobo.

The-Prettiest-Girl-in-the-World, being Hermione-Granger-smarter than me believes this is on purpose, to drive us into the shops or restaurants which are air-conditioned.

She could be right.

With the line soooo long, we couldn’t do the newest ride, Hagrid’s Magical Creatures Motorbike Adventure, so we made our way out of the Wizarding World and into the rest of the park, jumping on the Dudley Do-Right’s Ripsaw Falls ride, then lining up for the terrifying Hulk Coaster.

The Hulk was something to see (and probably ride, but there was no way I was going on that behemoth). As the coaster shot out of the loading area, it roared so loudly that you could hear it from the parking lot, then it flung the riders down a steep incline, then around and around, and somewhere along the lines, I would have thrown up or passed out. (Video HERE)

For The-Youngest, this was the reason for coming to Universal… that and getting a good wand, but the coaster, (like Volcano Bay), well, he had dreamed about it, researched it, and watched every youtube video on it (including how it was built!).

But, the truth be told, he too was terrified, and (as he explained) had worked his way through the rides in the park to build up his courage.

However, despite the fear that was making him bounce around like a drop of water on a hot pan, he wasn’t going to back down. To me, that’s brave – He did something he was scared to do.

For The-Oldest, he really didn’t get a HUGE kick out of the Wizarding World of Harry Potter, (which is completely wrong to me) but he did enjoy the terrifying rides. Those things don’t scare him at all. Nor do heights. Jump scares. Or It-like clowns.

S0 that Hulk coaster certainly met his criteria for a good ride. Fast. Good drops. And a great start to the ride.

By the time The-Boyz came back, the line-ups were too long to do the MOST terrifying ride, the Rip Rocket, and, frankly, The-Prettiest-Girl-in-the-World and I were done. Exhausted, sweaty, wet from a small rain shower, we slogged back to the car and drove back to the resort where we all passed out about 8pm.

It had been a great day, even if we missed about 2/3rds of the rides there, and even if we failed at sticking to our tried-and-true plan of getting there at rope drop, going back to the resort to recuperate, and then heading back to the theme park.

However, the toughest day was yet to come, the day that broke The-Prettiest-Girl-in-the-World.