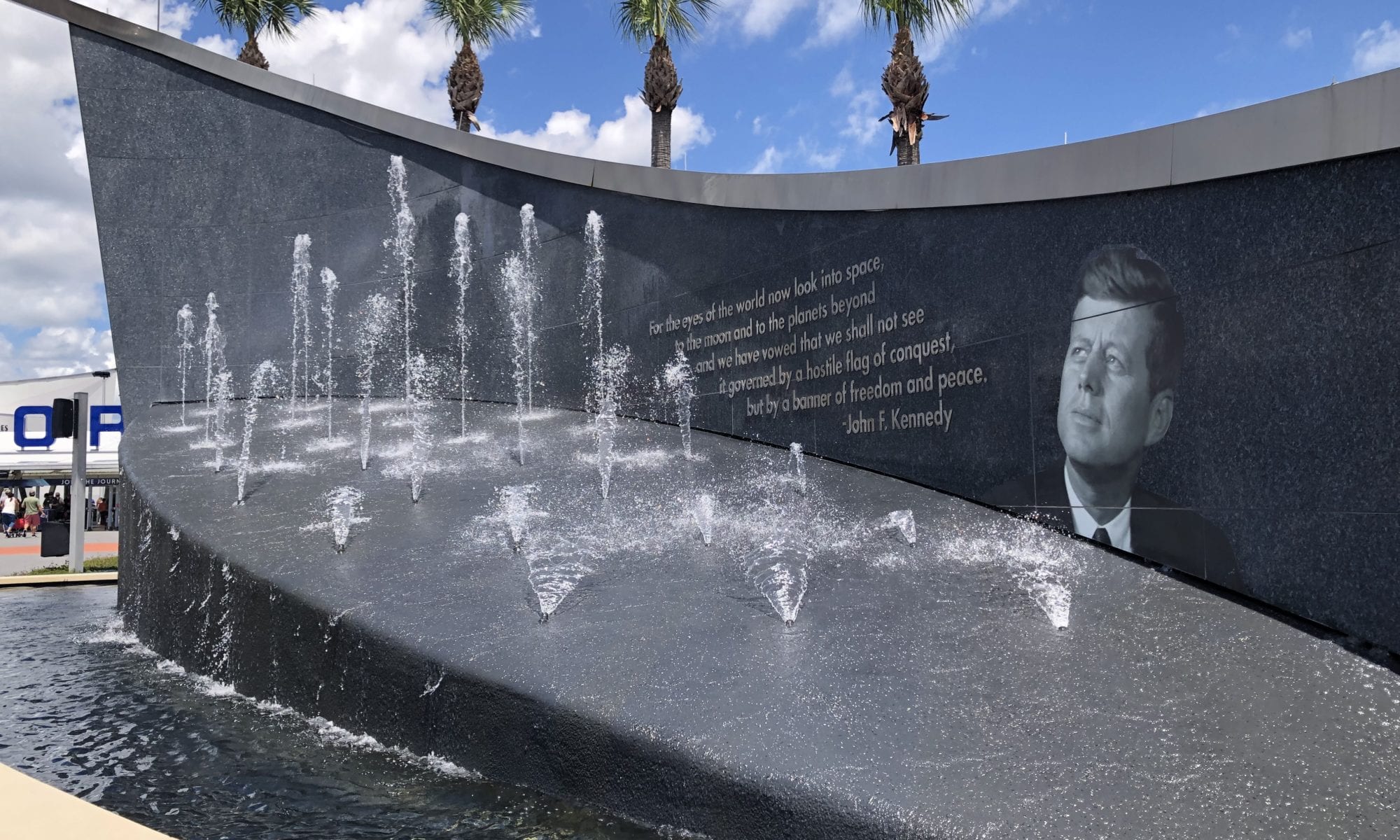 We’d not seen everything there was to see at the Kennedy Space Center and (The-Youngest would like to point out), we didn’t do the only ride there (a shuttle launch simulation.)

But we had to get on the road. We were about ½ an hour behind what was already a tight schedule. To make it, we would need the luck of the Irish to catch our flight.

By the time we pulled out onto the highway, even I was stressed, and The-Prettiest-Girl-in-the-World kept checking her watch like a terrorist wearing a bomb vest about to go off.

I drove as fast as I could without being super crazy. The roads in Florida are Albertan in their straightness, and a huge hill in Florida is about the height of our car. So we made good progress and we blazed through the toll stations (not stopping to pay because we had a pass that captured our rental car’s license plate and we’d be charged later).

We made it to the airport at 4.

Thanks to the superior navigating team of The-Youngest and The-Prettiest-Girl-in-the-World, we didn’t make any mistakes finding the rental-car parking lot. And, as we pulled in, someone came out immediately to check the car in. Alamo did a fantastic job speeding us through the process. A quick read of the mileage, a quick check for damage, and we were in the airport by 4:15.

We found the counter for Alaska Airlines and, again, everything went smoothly, the woman behind the counter ensuring we found seats together – and even upgraded us to the comfy-seat section (not first-class but apparently the seats had more legroom.)

It was about 4:45 when we reached the security line, a line as long as any in Disney World and with far less fun at the end (unless you enjoy your bags being scanned, opened, and your bottled water taken). Without slowing, we got in line and waited because, at that point, that’s all you can do. Passports were pulled from backpacks, water was thrown out, and The-Oldest kept his eye out for a piano.

It took a while to get through the various stations. Passport control (where I always look guilty of something for some reason), then the baggage check (where I always forget I left something in my carryon like suntan lotion) and finally the human scanner (where I have to enter, beltless, holding up my pants like a failed German general in Hitler’s kangaroo court).

But we played the lines like pro’s (and very un-Canadians), leaping into one that just opened up by the baggage scanners.

We’d cleared our last hurdle with a good hour to spare.

Stress melting away, we ate in the food-court, looking like people with peanut allergies surviving eating 10 peanut butter sandwiches. Due to time constraints, this was the only meal we’d had since breakfast, 7 hours earlier.

As we boarded our plane, only one problem

remained. We had a tight turnaround for our connecting flight in Seattle. Everyone said it wouldn’t be a problem, but then everyone thought the new Star Wars movies would be awesome.

But the luck of the Irish was indeed with us as we arrived at the Seattle Airport 20 mins ahead of schedule! I credit The-Prettiest-Girl-in-the-World (for using her mystic power to bend the world to her will.) I suspect she may have promised the dark gods a sacrifice of a chubby, nerdish husband, but that’s another story.

This story, however, ends well, with us arriving home at about 3am, very tired, very happy to sleep in our own beds. It had been a perfect end to an epic trip.