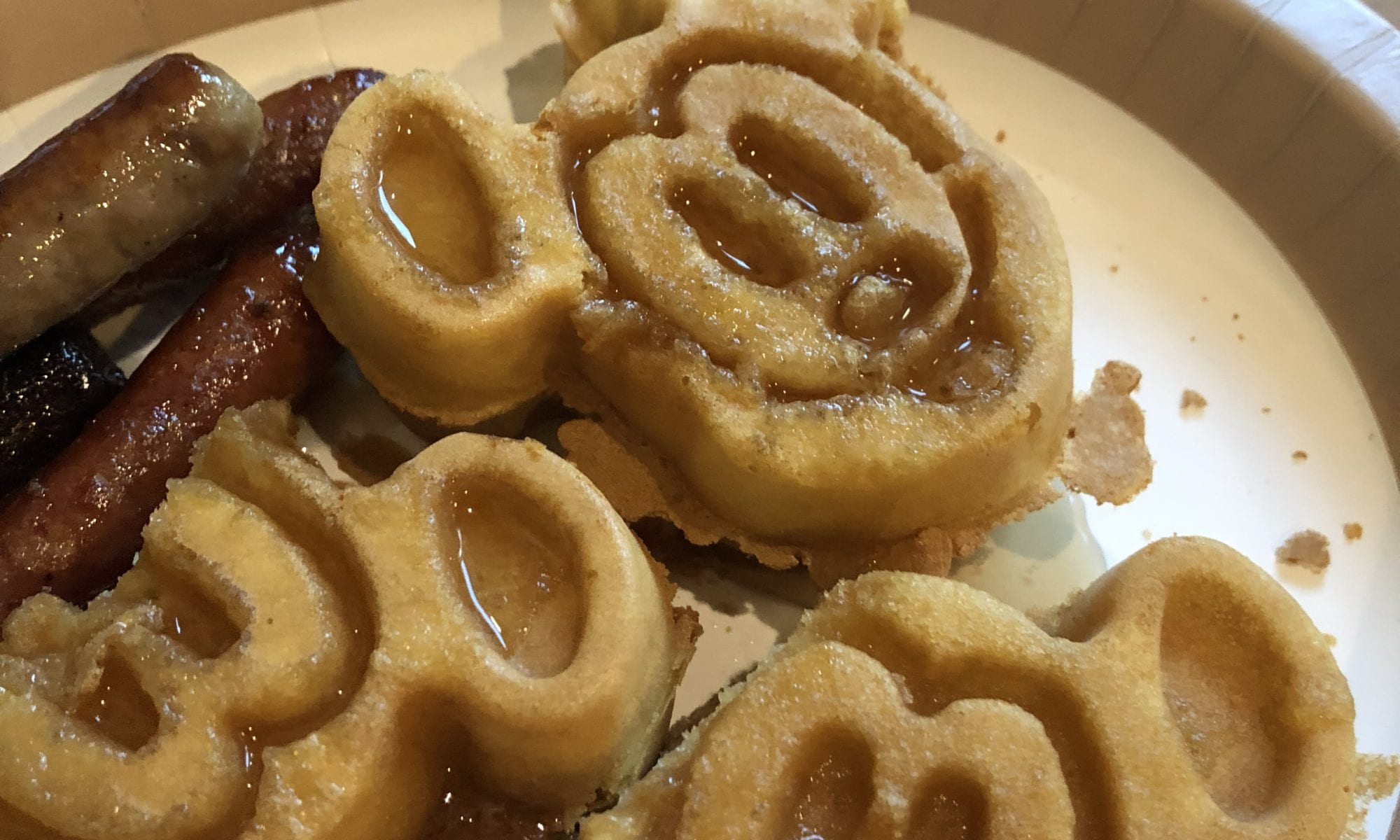 No rain in the morning, but the forecast for Disney World was more thundershowers by 2. Would we be able to have a great day or would the bad weather kill our riding time???

And was the weather really the thing we should have worried about?

Our plan for the first day at Disney World, we’d decided upon the Magic Kingdom. We had booked Space Mountain for 9:05, Splash Mountain for 2:05 and the oddly, super busy Dwarf Mine for 3:45. We’d try to catch the parade at 2:45 and the fireworks at night. It would be touch and go for those last items. Thunder and Lightning could shut them down.

The magical transport that I would call a bus would take 20-25 min to get us there, then maybe another 20 min in lineups so we needed to be on the bus by about 8. Or at least in the lineup.

Amazingly, we were all up, though ‘awake’ didn’t really describe it. The-Prettiest-Girl-in-the-World did heroic feats, getting everyone up, showering, making herself all pretty and stuff, and ready to go by 7:30. We packed raincoats, lots of sunscreen, lots of water. I took my laptop to do some writing on our downtimes (oh how foolish that was!) and phones to keep in touch or take pictures.

Then it was off to grab some food. We had the ‘quick service meal plan’ which allowed us 1 meal, 1 drink and sometimes, but not always, a snack, twice a day. (It was part of a great deal Alyssa helped us find.) Alyssa’s link is here, and meal plan link is here.

I ate mickey faced waffles, which were so goooood, while The-Oldest ate about ½ a scrambled egg and had a few bites of bacon. That didn’t bode well. He needs his food or he gets a case of the grumpies as bad as an old man (like me) who just saw a neighbour’s dog poo in his yard.

Worse, The-Youngest complained his Mickey waffles were too doughy and he didn’t like the non-Canadian syrup.  So he didn’t eat them. Good lord. (Spoiler alert, I did!) However, both The-Prettiet-Girl-in-the-World and I had GIANT coffees so we’d be good to go.

No matter that the boys had a bout of picky, thought I, we’re going to the Magic Kingdom, a Disney World theme park where there was all kind of food. Right? We’d have plenty of time, right?

To our credit, we finished by 8 and made our way to the buses.

Sure enough, there was a massive lineup for the buses!

Seems everyone in the hotel, I mean ‘resort,’ had the same idea we had – Get to the parks by rope drop (which is Disneyese ‘for when the damn place opens’).  So, like all the others, we got in line. The sky was clear, the sun overhead as hot as if we were in an oven, and the humidity, being a tropical paradise and all, was about 4000%.

However, what could have been a true nightmare was not. This is Disney World after all. A ‘cast member’ came out and said more buses were coming right away. So we waited and applied sunscreen with the dexterity of Cirque du Soleil acrobats to avoid spraying the other people in line.

This is a vital step in any sunny vacation. Failure to properly apply sunscreen results in my head looking like a tomato and likely a case of heatstroke. Worse, if completely assed-up, we’d end up at the nearest clinic to be treated for third-degree stupid sunburn.

I speak from experience.

Just as we finished covering ourselves with sunscreen, the bus arrived and we were all packed-in like businessmen on the Tokyo subway.

20 min later, we had arrived at Disney World’s Magic Kingdom!

Little did we know that the seeds for how the day would play out had already been planted.

For good and bad.

As always, thanks for reading the blog. Please follow or share or talk about me to your friends, but, ah, in a good way. Also, more pictures here on Instagram. Or here on Pinterest.