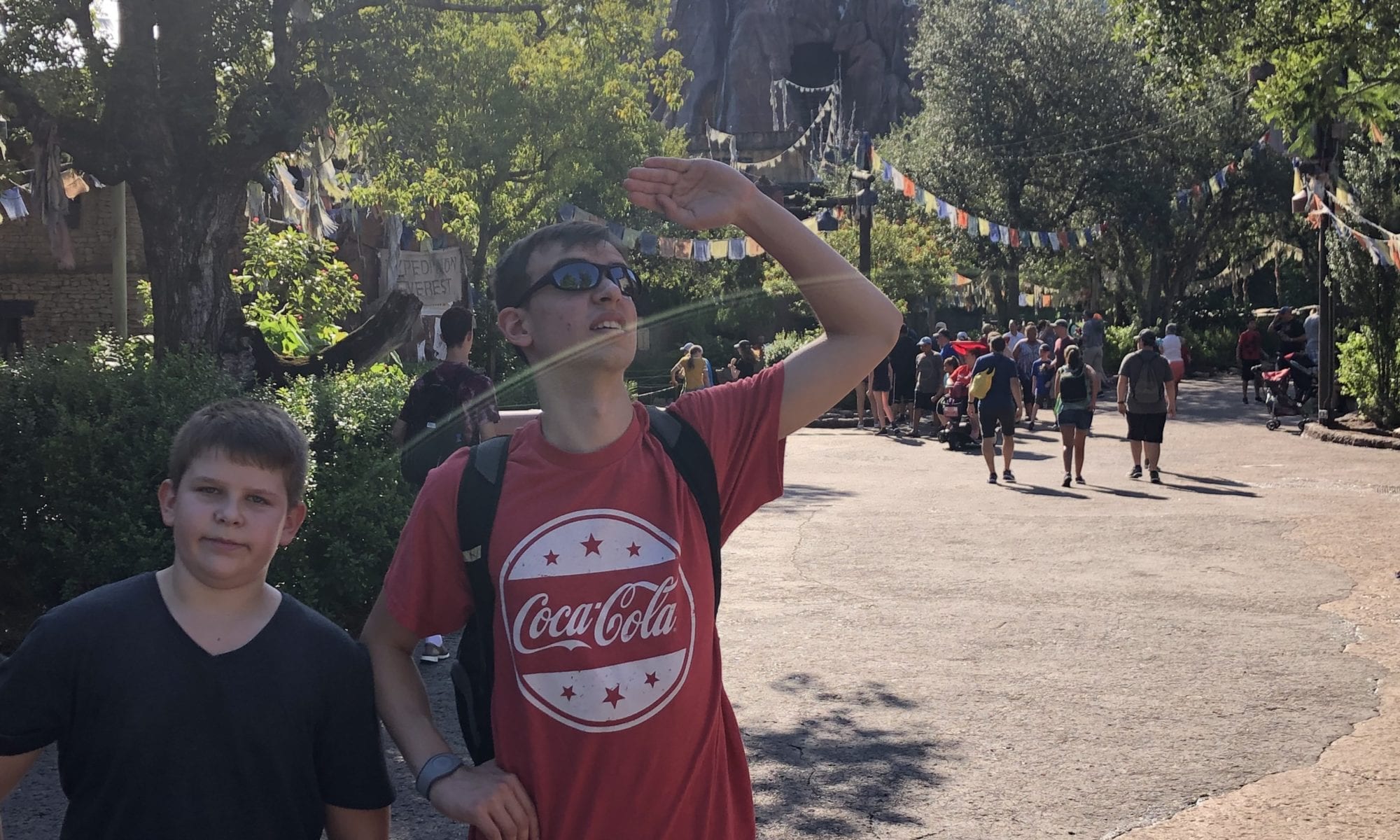 I had thought that our first day at the Magic Kingdom would be our toughest. We’d be jet-lagged, we hadn’t figured out how things worked, and we had no idea how the weather would affect us.

But I was wrong. It would be the day we spent at Disney World’s Animal Kingdom.

A day that almost became a disaster.

We actually managed to arrive at Disney World’s Animal Kingdom in time for the ‘rope drop’ (opening time) and made our way to our first ride. We had 3 booked for today. Expedition Everest at 9:10. Kilimanjaro Safari at 10:20. Avatar: Flight of Passage at 5:00.

So, first up, the Expedition Everest rollercoaster which had terrified me when I’d gone on it in my Joe 1.0 life. Now, older, a lot wiser, a lot less comfortable with plummeting 10,000 feet, I had zero desire to risk a heart attack, complete paralyzation or listening to myself scream like a little girl. So, The-Prettiest-Girl-in-the-World and I stayed behind.

The Boyz, however, were super keen to test it out.

They soon found out that this ride was not for the faint of heart. The-Oldest had to shut his eyes as it tore downwards like a rocket plunging to earth, and while The-Youngest said he had fun, he declined to go on it, again. Ever. Like never, again. That Yeti had really terrified him.

Still… First ride: A success, I say, a success!

However, by 9:30, it was already getting hot and humid, and morale began to plunge like the stock market during a trade-war with China. Yesterday’s crazy day of theme-parking and a night of little sleep had left us all weary.

Hoping to shift the mood, I talked the boys into doing the Kali Rapids (since it would get them wet and cool), while we adults chose a nice, dry bench in the shade.

The rapids weren’t that great, according to The-Youngest, but they did get SOAKED with a capital WET.

But by the time we reached the Kilimanjaro Safari ride, grumpiness was settling in like a spaghetti stain on a good dress shirt.

But the best I got was a shrug and a look that said I’d rather be sleeping (The-Youngest) or playing the piano (The-Oldest).

The safari wasn’t quite like the San Diego Safari, this was a large zoo, somewhat like the Calgary Zoo, but with only the most popular animals on display, (yes, I’m sure there was a survey done and those poor, ugly warthogs were left out.)

No matter. I loved seeing the animals, I won’t lie. The giraffes were magnificently elegant. The lions were sleepy but cute. The rhinos were content that no one was trying to murder them for their horns.

Crocodiles lurked menacingly in the water. The boy elephants play-fought each other for fun. And the hippos submerged themselves waiting for a moment when you thought they looked cute and wanted to pet them, then they’d bite your freaking arm off. Those buggers kill more people in Africa than any other animal due to them being complete assholes.

As well, the tour guide was lovely, if very scripted, but the real bonus was that we could do this ride sitting down.

Sadly, though, the animals didn’t raise the spirits of the Boyz so we went in search of food. Food usually perks them up. A bit.

I found the Dole Pineapple Whip counter which made my day since it was on my Disney Bucket List. I had mine without rum. Maybe a mistake. It was still very yummy, even if it melted all over my hands and I became that sticky, chubby kid everyone hates.

The-Prettiest-Girl-in-the-World had a dole float, which was far less messy and (surprisingly) she also had hers without alcohol. The boys, being now thoroughly in a bad mood, refused any food. They grumped at each other, at the weather, and at the food. Everything became either boring or stupid.

Time to put our brilliant new plan into effect. Time to head home. Time to rest in a nice AC room. Or float in a pool. Then head back to do Avatar, maybe get some food, or maybe even see the River of Light show.

But when we got back, we found something even more fun! The arcade was open and it was free!!! (we had no idea why but weren’t going to look a gift-arcade in the coin-slot), so the Boyz played Guitar Band, raced motorcycles and zapped aliens, forgetting how grumpy they’d been.

While the boyz played, I caught up on my writing at the Pop Century cafeteria, and the Prettiest-Girl-in-the-World got to spend some boy-less time alone, meditating and thinking girl thoughts.

For the moment, everyone was happy.

But would it stay that way? Would the rest of our trip to Disney World’s Animal Kingdom be doomed?