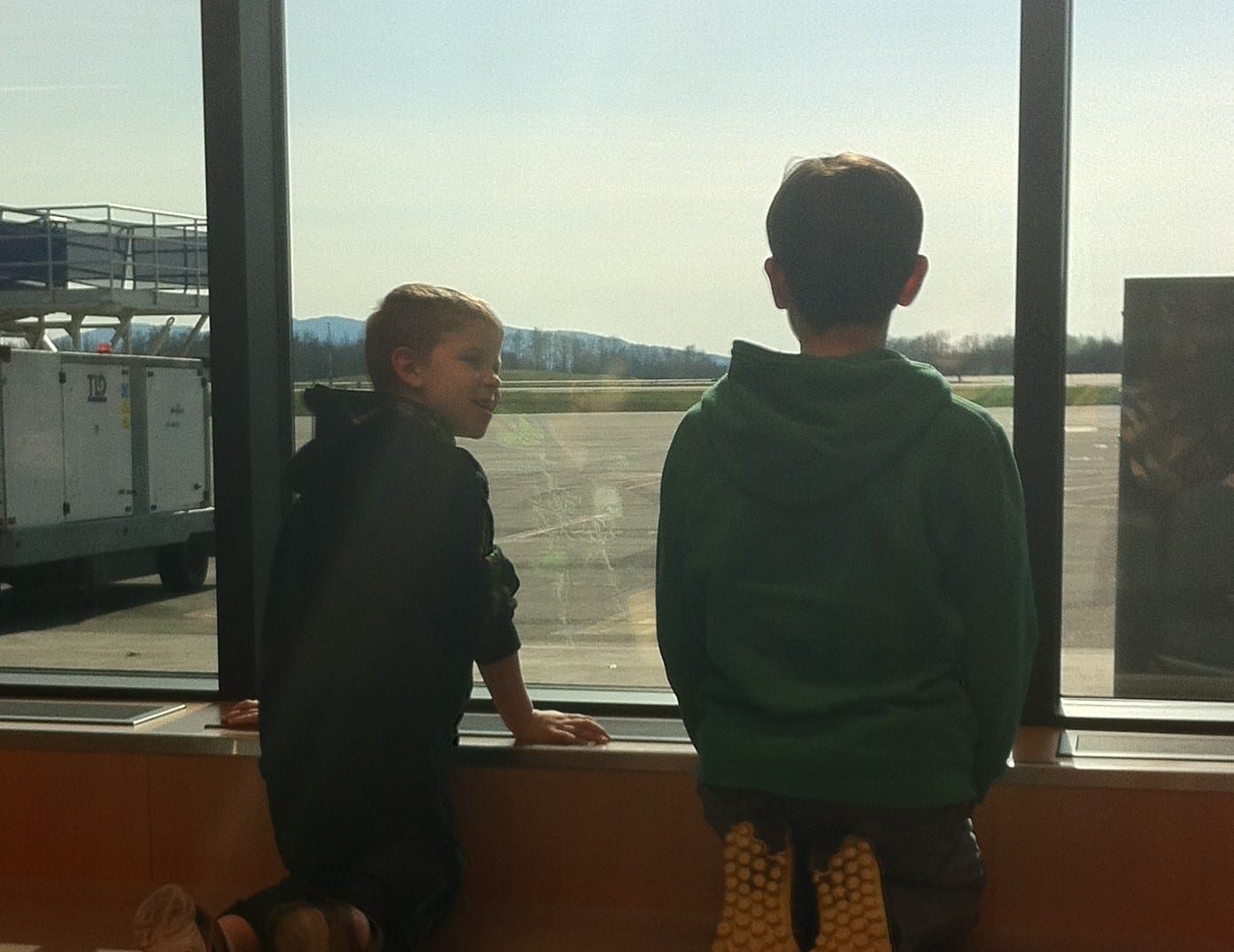 We had some time to kill.

If there was a rule #2 of traveling, it would be avoid places Russia is likely to invade. But right after that would be make sure to eat at regular intervals. Hungry people are grumpy people. Little hungry people more so.

However, imagine you’re 7 and 11. Imagine you’re going on a dream trip to the most awesome place in the universe that doesn’t have mascots, cuz, you know, like, they’re creepy and kinda scary. Then imagine you’re

forced to sit in a restaurant with your mom and her unbelievably amazing boyfriend as they discuss what pie they want the most.

Eating is likely the last thing on their minds. Waterslides. Rollercoasters. A themepark filled with lego. These are the things that are important. Not ‘do you want fries with your chicken tenders.’

Plus, we were so early that I could eat my pie one agonizingly slow bite at a time, which I kind of have to do anyway due to my stupid braces.

But the boys were awesome. Sure they fidgeted a bit. They vibrated with excitement to do… something. But they ate their food, they didn’t throw too many things at each other and they didn’t make fun of me when I almost left the restaurant without paying.

Embarrassing moment #1. I was so consumed with making sure we had the bags, the kids and my phone, I almost walked out without paying. At the door, the Prettiest-girl-in-the-world put a hand on my arm and asked, did I pay? I hadn’t and turned around before I could be tackled or, worse, someone thought bad things about me.

“What would happen if you didn’t pay?” The oldest one asked as we walked back to the car, having paid.

“Because I would’ve run faster than you. They would’ve caught you.”

“Exactly. That would have given me the edge. That;s how I would have outrun you. Then, you’d have to do dishes until your fingers were all wrinkly and your skin was red from the super hot water.”

“For all of us. You wouldn’t believe how guilty we’d have felt to have to watch you do all those dishes.”

I know one day these conversations will come back to bite me on the ass. One day they’ll ask, how can we take you seriously, Joe? And it’s a good point.

As much as I love joking around with them, I have to make sure that I don’t overdo it.

However, despite a LONG lunch, we arrived at the airport insanely early. Our bags were checked in. And we waited in the waiting area.

I marveled at how the boys interacted. They are each other’s best friends. They fight sometimes, sure, but watch them for any length of time and you’ll see how much they need each other, how much they like being together, how they love doing stuff with the other one.

When they play the 3DS, they share their triumphs and defeats, the tricks that they’ve learned, the funny things that just happened. When they’re watching planes come in or fidgeting and giggling while sitting in the waiting room or planning which ride will be the most awesome, the experience is simply better because of the love they share for each other.

I hope they never lose that closeness. They have no idea how valuable it is.

In a perfect world, we would have been able to walk right on the plane. But instead I got a chance to see the boys survive boredom together. I count myself lucky, even if they don’t.

On to San Diego!

0 Replies to “Food and Fidgeting”