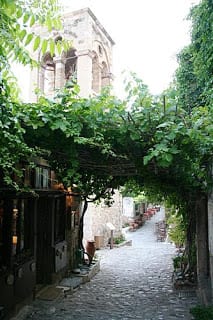 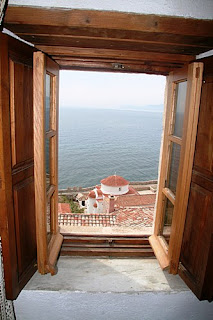 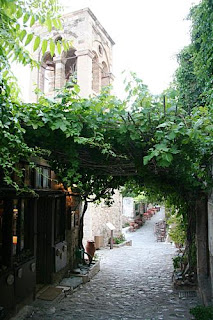 So there we were, in a stone vaulted room eating breakfast and discussing late 12th c medicine and, behind us, there was this conversation.
“So it was all like, y’know, seriously, uhhhn, and then, like it was like man and I was all like totally.”
Ok, so I really try to be respectful of other cultures. I do. Some times I’m an ass but by and large, I hope I don’t disparage other people’s way of doing things. But Hippilese, I just don’t get. It drives me batty to have whole conversations with little more than a grunt and ‘like, ‘yknow, totally, man”. I dunno why but it does.
The other funny thing this fellow did, indeed the very thing that attracted my attention, was that he went mmmmmm with every bite. An organsmic type of mmmm. It went on and on and on and on. I turned around, thinking, at first, poor retarded fellow but it was just a long-hair man in his early 30’s in a tie-dye T-shirt and frayed sandals. When I turned back to M, it was all I could do not to laugh out loud when he ate bite, mmmmm after bite, mmmmmm, after bite, mmmmmm.
Funny as hell.
To be frank, we didn’t want to leave so we came up with a plan. Barricade the door with the bed and stones from the fireplace. The police wouldn’t be able to get in and they wouldn’t use tear gas in a UN protected zone and wouldn’t lob shells at us for the same reason. If we stocked up, we could hold them off for days, maybe weeks.
Not a bad idea but then we’d miss Freya while we spent the next ten years in jail. So, we did the next best thing. We finished breakfast, left the hippy guy to his mmmmms and sat on the veranda. In the morning sun, this side of the town caught the light just right. Stone walls seemed brighter, terracotta roofs seemed redder and we watched shadows crawl across the church dome like a sun clock. 10 o’clock became 11:00. 11:00 became 12:00 and then, like it or not, we had to head out.
Reluctantly we packed up, hauled our bags across the cobblestones and walked through the gatehouse. Looking back, the sky blue, the sun shining so brightly that the stones looked chalk-white, the sound of traffic once again assaulting our ears, we really didn’t want to leave. But, one day, we vowed, we’d be back.