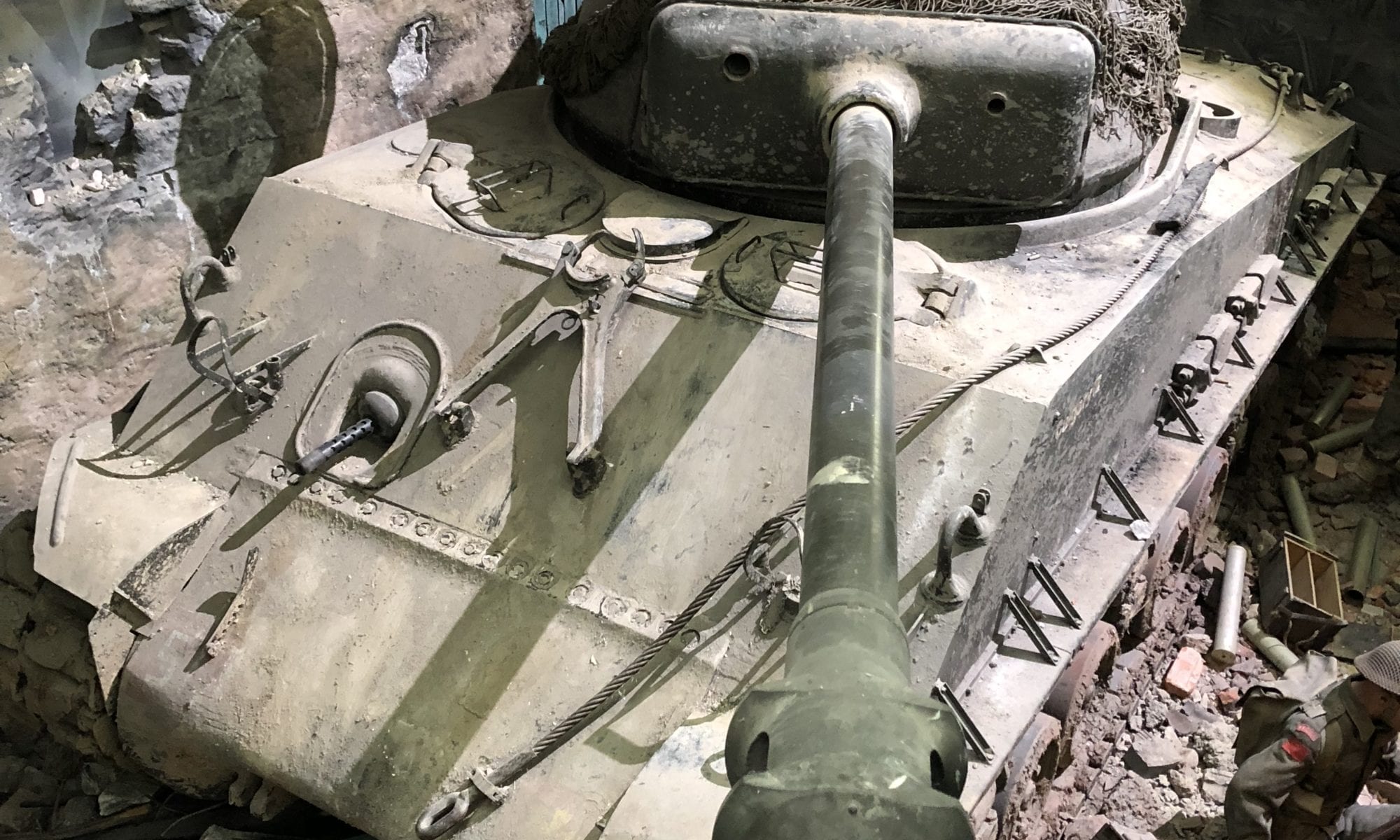 Or Tanks for the Memories!

Of all the things we planned to do, the thing I looked forward to the most was seeing the Calgary Military Museum and their collection of tanks.

If you look at my website, you’ll see there’s a whole section for tanks. I love tanks. I don’t know why. My therapist doesn’t know why. There’s a lot of head shaking and eye rolling. But when I found out there was a military museum in Calgary of all places, I had to go.

The-Youngest decided to join me, (part of his plan) even though it meant getting up early. The-Prettiest-Girl-in-the-World and The-Oldest were happy to sleep in.

We managed to get there in about 11 minutes. Ok, 16, due to me getting lost despite a perfectly functioning GPS (when the nice GPS lady said take the SW exit and the sign said south, I hesitated too long while I tried to figure out if there was a SW exit as well…. And, ah, no, there wasn’t.)

No matter. We got there.

Most of the tanks were outside, which was fine except that it had decided to rain. Of course. And I had not thought about bringing a jacket. Of course. I debated bringing an umbrella, but apparently, people who use umbrellas here are considered marginally “challenged” in Alberta so I thought what the hell, a little rain never hurt anyone.

The tanks they had on display I knew well. The Churchill VII, a huge British heavy tank, a Centurion Mark III, perhaps the best post war 1950s tank built, a surprisingly big Sherman M4E8 (an ‘Easy Eight’), and a soon-to-be-restored Russian T-34-85. Near the entrance, they’d stationed a T-72 with desert camouflage. ‘

Both The-Youngest and I were super stoked to be there, to touch the tanks to look at them close up. Only one of us did a happy dance, and (spoiler alert) it wasn’t him.

I took tons of pictures while The-Youngest told me stories of the adventures he’s had with the tanks while playing World of Tanks on the Xbox.

I had forgotten how huge tanks could be. Even the Sherman which was supposed to be a fast, medium tank.

No German tanks, though and let’s face it, the best tank builders in WW2 were the Germans. However, despite their Tiger tanks with their huge 88mm guns that could shoot straight through a Sherman, the allies produced so many tanks that we simply overwhelmed the Germans with very reliable, mass-produced machines.

But it makes me realize the courage of our tank crews. It’s all fair and fine to sit in an 80-ton German heavy tank with a massive gun and armor that’s almost impenetrable, and it’s quite another to try and fight one of those beasts in Sherman.

Inside, the museum itself was fantastic for its size. They had great displays set up in regimental rooms, from the famous stand of the PPCLI against the German gas attack in WW1, to the famous victory for the Canadians at Vimy Ridge, to the battles in Italy and France in WW2, to the heroic stand during the battle of Kapyong, in Korea, and finally, to the peacekeeping missions around the world.

Check out my history section if you want to see more about all of this.

After seeing all the regimental rooms, we quickly toured the naval part of the museum, then the air force section, but had to pass on seeing their collection of planes due to a particularly scary entrance into those hangars (though The-Youngest had been so awesome coming with me that I didn’t mind we missed the planes.)

I could have spent long hours there reading of the heroic moments of these Canadian regiments, but we had a lot to do and The-Youngest, while vaguely interested in guns and tanks had no stomach for reading, which seemed way too much like school work.

We were off to see dinosaurs next.

However, if anyone gets to Calgary, has an interest in the military, a family member who served, or hell, you just love a good museum, check it out. The staff were awesome. The displays fantastic. Fun was had.

And the sacrifices of our armed forces should never be forgotten.

Hey, if you’re interested, here are a few other links.

World of Tanks (the best tank game ever!)

The King’s Own Calgary Regiment History