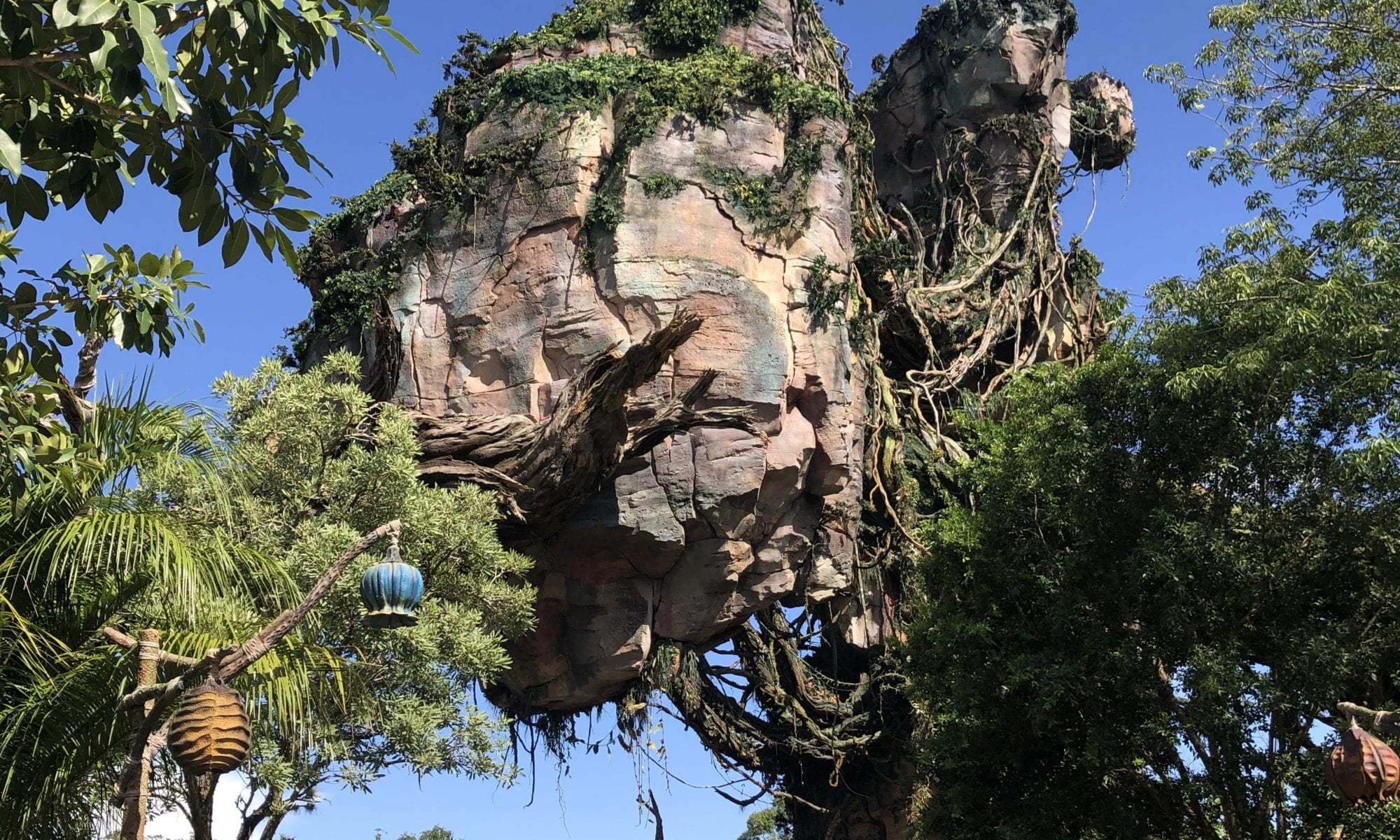 At my old age, it’s hard to actually surprise me.

People doing stupid things? (I have a whole top 10 from Disney World coming up), but those things hardly raise an eyebrow. Something amazing invented? Well, of course, it’s the age we live in. A twist in a movie? Ack, I saw that coming in act 1.

But the Disney World’s Pandora area surprised me.

We arrived back at the Animal Kingdom Theme Park at about 4:30, rested, good mood restored and ready for some fun in the evening. Having a Fastpass for Avatar for 5pm, we raced to Pandora.

From the moment we stepped into Pandora, I felt like I’d gone to a different world.

Then, as we marched to the ride, I saw they had a show with the Pandora Utility Suit (pic here.) The man inside the towering exoskeleton put on a decent show, though, weirdly, I was the only one who ran to see it. The rest of the family waited patiently with their magic bands for the 5pm Fastpass appointment while I got my nerd on.

Once inside the mountain, a ton of details, big and small, made it seem like were inside an underground complex from a different world.

From the scuffed paint on the floor to the doors that whooshed open to the posters on the walls, the attention to detail was epic.

And when we were led from the waiting area into the ride, we didn’t just jump on the scooter thingee, no, we found ourselves in a decontamination room. A person appeared on the screen and explained what would happen, and why we had to do this whole avatar thing.

They scanned us (but didn’t probe us, thankfully – that’s a whole different and somewhat uncomfortable experience), decontaminated us  (complete with 4D puffs of air), analyzed our DNA, and then we were assigned Avatars. Mine looked like he’d walked into a wall a whole bunch of times, but whatever, it was different from all the other avatars.

And it was genius.

See, the time we spent outside looking at the bulbous, alien plants, or me pointing out how even the guard rails were all Pandora-ish (which, spoiler alert, no one really cared about), to the organic-looking drums the boys drummed, to the decontamination room, it all built up the expectation.

They created a world (and a ride) better than anything else in Disney World. Not entirely unique, as Star Tours still had that feeling, but it’s like they took all the best things they learned and applied it here, in Pandora.

I won’t lie, I became like The-Youngest, giddy and as excited as a boy on his first date.

Then the door leading out of the decontamination room whooshed open and, like good Canadians, we followed directions, put our packs away, sat on our bikes, and strapped in.

But ‘strapped in’ isn’t the right term. As we gripped the handlebars, braces were placed against our backs and sides. It was oddly snuggly.

Like good Canadians, we put on our magical glasses and waited.

Then the bikes began to vibrate. Right on our tummies and backs where the braces had been placed.

We waited for the doors in front of us to open. My heart drummed inside my chest.