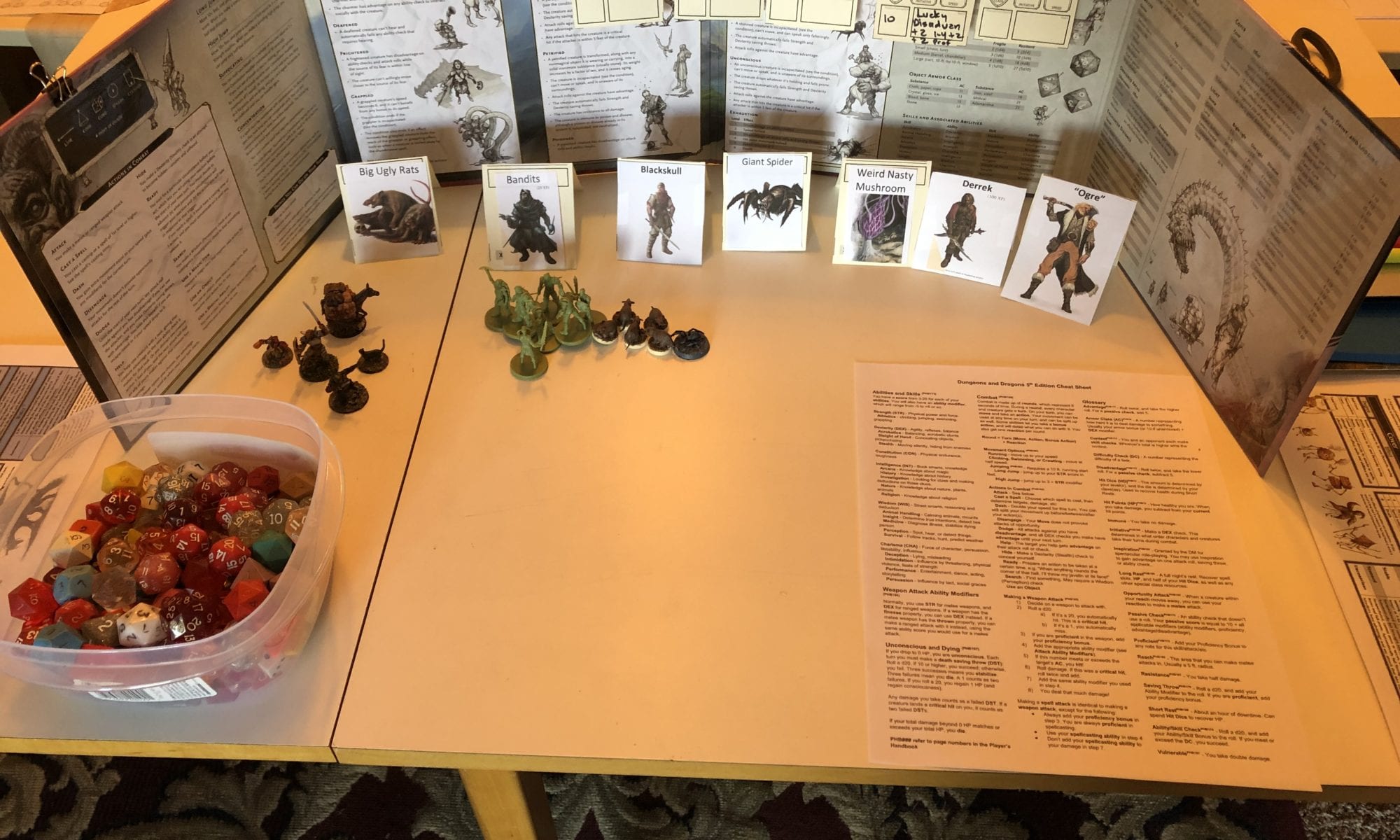 I thought I was prepared for everything, but I had forgotten how D&D can twist your expectations. For better. Or worse.

So here’s how it started. All three players, the Oldest, the Youngest and my friend, were fighters. Rough tough soldiers. Killers. Warriors.

Now the coolest thing about an RPG (a roleplaying game), is that you can create a character that’s basically one form of you, or someone you may have read about or watched on TV. Or a combination of the two. You can be a Gimli-like dwarf with a bit of nerdy Sheldon, for example.

“Bazinga! Certainty of death, small chance of success- what are we waiting for?”

Or, with the new D&D rules, they assign a few traits to help you create an amazing character.

Here’s what the boys got. The Youngest, who has already made his Christmas list, and it is 2 pages long – got a character who despises money. Material things mean nothing to him. Nothing. He was all about the fame.

Ha. About as opposite to the Youngest as it could possibly be.

The Oldest got a character who loves the forest. LOVES it. Would never harm it. Ever.

Now him being an ogre and all, that was kinda cool. Ogres are known for eating children and bashing knights on the head with big clubs. But not this one. This one loved nature. A big, huge ogre with massive muscles who literally loves to smell the roses. Lie in a bed of clover. Look at the color of leaves in the forest.

OMG, this was going to be good.

So I built the first adventure around those things. The Youngest wanted only glory so I geared up great glory for him if he succeeded. For the oldest, a threat to nature. To the things he loved the most.

It all began, as most adventures in D&D begin. In an inn. There, thought I, they would be confronted by smelly bullies who hated the big ogre. The big ogre would likely pound them into snot, especially if his brother – the fighter who would see great glory in coming to the aid of the outnumbered ogre – helped him out.

Then, based on their manly heroics and impressive tossing of bad guys around, they would be asked to help find a lost caravan. In the forest.

But when I began the encounter, the ogre did something completely unexpected.

I, as the *cough* dungeon master began: “Alright, Ogre, as soon as you enter, three men stand up from their tables. One of them, a burly man with stained leather armor and a red nose from too much drinking, marches up to you.”

(On the tiles I’d set up, I place an Ogre figure by the door and six bad-ass-looking guys near tables. I placed figures of The Youngest and my friend at another table).

Me: “The ruffian looks up at you and says, “Your kind ain’t allowed in here,” He reaches for the rusty dagger at his side. He’s so close to you, you can smell how much he stinks. Like our dog after she’s rolled around in dead fish. Behind him, you see his two companions stand up as well and try their best to look menacing.

“Either you go quietly,” the thug in front of you says, “or we’re going to carve you up real bad like.”

(Now, traditionally, and indeed in most bar fights, this is where the other side postures up and soon all hell breaks loose… but not this time.)

Ogre: “What if I just paid you to walk away.”

“I’ve got 100 gold. Why don’t I give it to you and you can feed your families or go buy pokemon cards or something.”

(Now, this is where a video game would force the issue. It has no ability to improvise. To adapt. To overcome. A machine is not a marine. – Or a dungeon master, which is pretty much the same thing.

But I can adapt.

Me: “The thugs seem confused. The guy in front of you takes a step back. He rubs his jaw, thinking, but he likes the idea of free money, so, yeah, he can’t pass that up. They take your money, laughing, and leave.”

The Oldest beams. He’s beaten the encounter. Not by violence. But by using his head and a bit of cash. Kind of like what I used to do in junior high where I traded my lunch for someone not punching me in the face.

But it reset the whole game. Like a QB who runs more than he throws, like a politician who actually does what they say they’ll do, like a movie that’s not filled with product placements.

I would have to readjust EVERYTHING and quickly. I had a warrior who hated to kill. An amazingly cool trait, but not something I expected.

I mean, what do you do in a game where the whole point is largely to slaughter the bad guys?