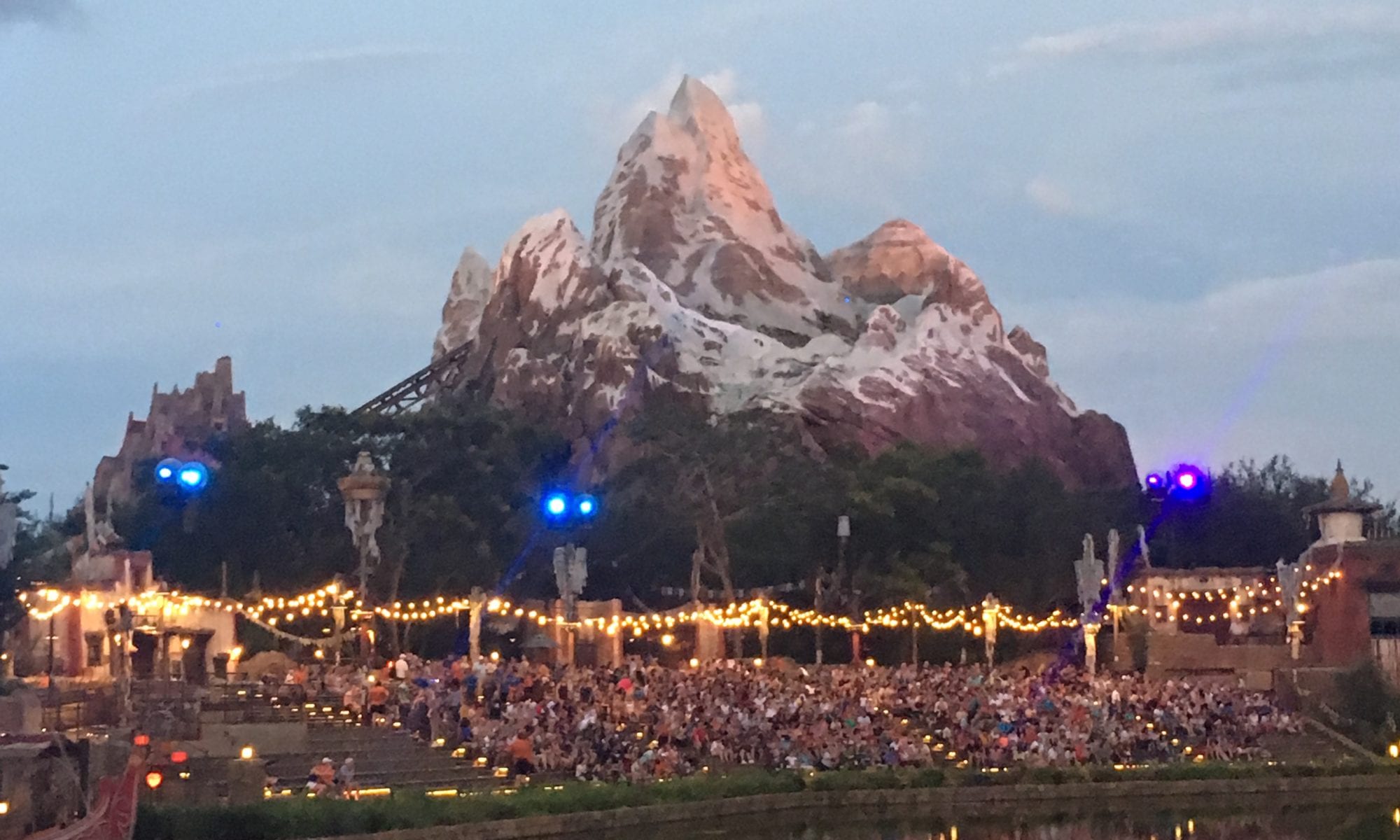 Tonight, the River of Lights.

I have to say, Disney World does so many things right.

First, they kept the weather amazing. I don’t know what Mickey Magic they cast, or what Avatar weather machine they activated, but the evening at Animal Kingdom was perfect. Pink skies. Long, fading clouds. A little hot, but manageable.

Second, they do the details sooooo right. There’s a whole rant about that later, but they create little worlds better than anyone, even most movie makers, though, yah, I guess, technically, they are movie makers as well.

Thirdly, they do shows well, perhaps better than anything in Vegas. Oh, sure Disney World has far less nudity than Vegas, and they’ve geared up their shows for younger audiences, or people who are secret 8-year-olds like me, but they are always entertaining and, often, spectacular.

River of Lights promised to be no exception.

But first we HAD to see the Kilimanjaro Safari in the evening. When talking to someone in the candy shop, he said it was a completely different experience at night. He also offered me a lot of candy to get into his van, so I’m a little suspicious of him, but his safari info mirrored what I’d see on YouTube.

Oh, how I love no line-ups.

And the van-guy was right. A lot more animals had come out to wander around or stare menacingly at us.

I saw giraffes glide across the plains, rhinos lumber around like they’d had a hard day standing in line-ups at Disney World, and the hyenas stalk around in a dangerous-looking pack.

But the highlight was the lions.

They roared at us!

Even the tour guide was excited.

The lions roared like majestic thunder, which was thrilling but also oddly unsettling (mostly because I think they were saying, back in my day, we’d eat your face off.) One moron roared back, but even that didn’t spoil that moment.

Super stoked, we finished the ride & soon reached the seats for the River of Lights show.

Ok, we didn’t have the best view.

Ok, despite the sun going down, it was so hot that I began to sweat out of my eyeballs.

But none of that mattered when the show started.

Giant lotuses floated across the lake and spouted all sorts of colored water. Animated creatures danced on the water spray. Big turtles and other animals crawled across the water changing color, and all the while music blared, happy and all Lion-Kingee.

What made it even better were two girls who sat behind us. They knew every character who appeared in the water spray, would sing along with the songs with unrestrained glee, and even threated to cry at least twice because of how the show moved them.

I have to confess, when I’m watching a show like this or riding something like Avatar, the Flight of Passage, all cynicism melts from me in a sweaty puddle at my feet. All sarcasm dissipates like mist. I become a goofy kid, again, giddy and bouncy and delighted.

If only I could be that way all the time.

Either way, the boys had fun, though not as much fun as me, and The-Prettiest-Girl-in-the-World, being a girl, loved the message of love, the light displays, and music.

It had been a great day.

And tomorrow, we were sure, would be even better!

The video of the River of Lights, below, is far, far better than my own, but being there, in person, is far, far more magical. 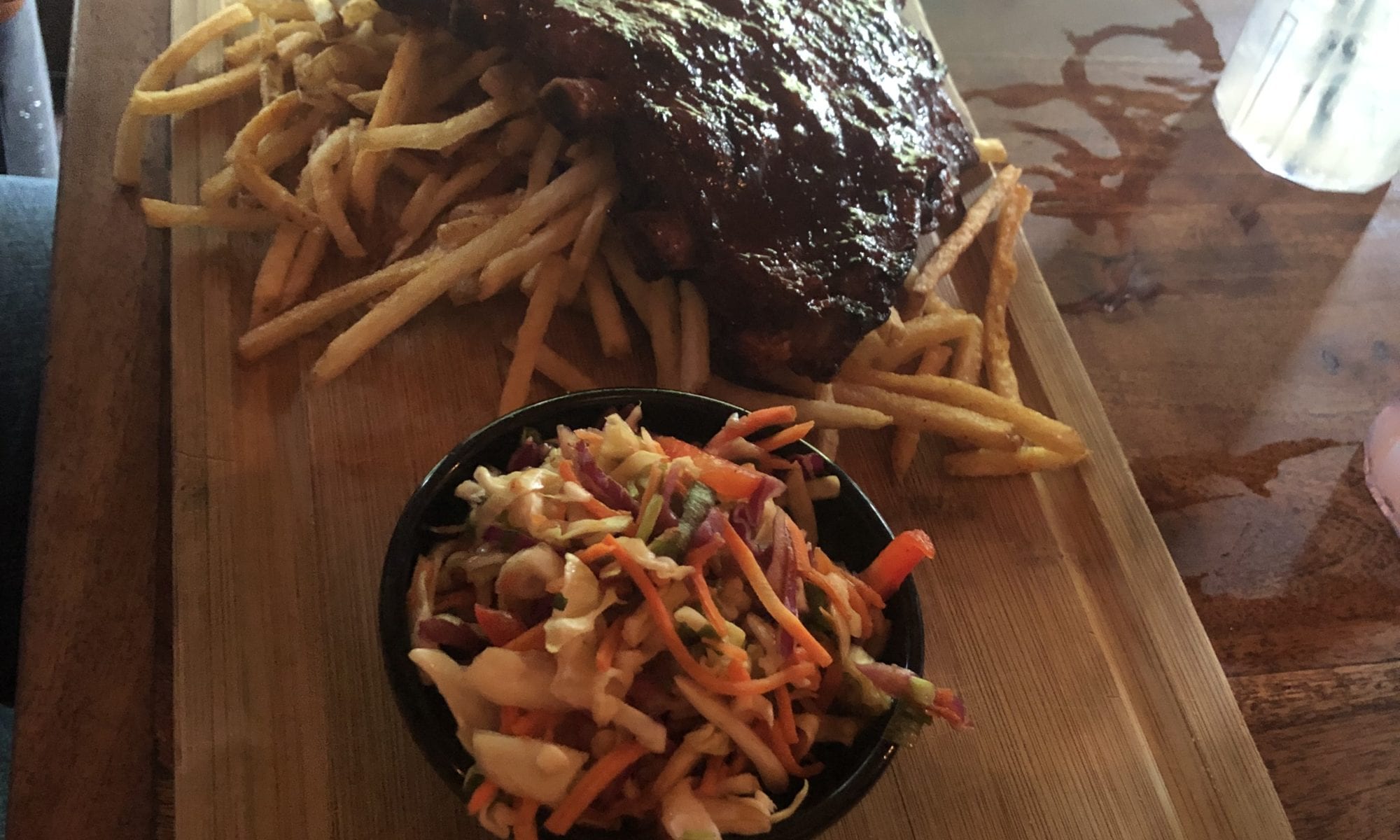 We’d only eaten at quick-serve places in Disney World due to our epic Disney Deal, but we decided to risk a few $$$ and try Korean BBQ ribs at the Yak and Yeti restaurant. (Asian food).

It was one of the best-recommended restaurants in Animal Kingdom (if not the whole of Disney World), but based on our experience at the check-in counter, our expectations had been lowered to the point that if we got plates of ribs half-eaten by yaks, we wouldn’t have been surprised.

However, the moment we sat down, we met our waiter and he began to change our minds!

A southerner from Georgia, he had that ‘southern charm’ thing in spades. He made us laugh right off the bat, and we found out he had plans to go to Whistler in February for some skiing. That perked The-Youngest up, who immediately had to tell our waiter about every single run, and how good they were and how well he’d done on them.

Our waiter listened well past when he could have made an excuse (like the Yeti in the kitchen was on fire or something) and left.

Simply put, our waiter was fantastic. He’s one of those guys you’d invite over for a BBQ and beer.

After taking our picture about 100 times, he raced off to get our drinks. The-Prettiest-Girl-in-the-World didn’t order anything alcoholic, (super surprising considering the day she’d had), but instead chose a refreshing non-alocholic drink with all sorts of leaves and happy juice. For The-Oldest, our waiter brought 3 children’s cups of milk so that he could have enough and get free refills. For me, a Kirin beer (no free refills). For The-Youngest, just water.

Then we ordered our food, the food we’d come across a whole park to eat – Korean BBQ ribs.

But The-Oldest decided to try a Kobe beef burger since he wasn’t a big fan of spices or sauces or sauces with spices. He’d never had Kobe beef before so he wasn’t sure this was the best choice, but we told him to give it a try, it may be the best beef on the planet. Or in the universe for that matter since they don’t have cows on Alpha Centauri 11.

The-Oldest asked how I liked the beer. Kirin’s a great beer, I replied. Want a sip?

The-Prettiest-Girl-in-the-world sat bolt up and shot me a look.

Here the drinking age is like 80, I think, while the gun age is 4, so if I’d have given The-Oldest a gun, I’d have been fine, but a drink? I may have risked serious jail time. But whatever, we were on vacation and it was just a sip.

She said it was ok.

We looked around like we were about to rob a bank or declare ourselves Trump supporters, then, with no one looking, The-Oldest took a sip.

He didn’t like it much. I mean, who really does the first few times, but he told his mom he thought he’d take up full-time drinking now, said that’s what most musicians did at some point, said it might help his creativity.

The-Prettiest-Girl-in-the-World gave me her I’m-going-to-shank-you look but I pretended not to see her.

When the Korean BBQ ribs arrived, the three of us dove in like starved hyenas, even making similar sounds. The ribs tasted amazing.

Spicy, tangy, they had not too much sauce, and not too little. Plus the meat fell off the bone so easily that I think if I had sneezed, I would have sneezed the meat onto the lap of the person at the next table (and you could well imagine how embarrassing eating it off his lap would have been.)

The-Oldest, when asked about his burger said it was ok. High praise for a teenager, but still, a Kobe beef burger deserves something more like “OMG, so amazing I’m going to leave home and live at the Yak and Yeti,” or “That’s so tasty, nothing else will ever be as good so I’m going to become a Tibetan Monk.”

But that dinner was one of the best we’d had in months and months, maybe the best this year. Even The-Youngest agreed.

We left with each one of us satisfied and in great moods.

Despite that ‘cast member’ fail, we were having the best day! The Boyz rode Expedition Everest and took a wet ride on Kali River. I got to eat Dole Whip and touch the Buddhist bells for good luck, while all of us got to see lions and rhinos and elephants.

Then, before the adventure could become a grind, we went home to rest, returning to go on the Avatar: Flight of Passage ride, find a table at the Yak and Yeti, joke around with our utterly charming waiter, and then ate an amazing Koren BBQ ribs!!!

What a great day!

But that wasn’t the end. The Kilimanjaro Safari and River of Lights show would help cement this as a truly awesome day.