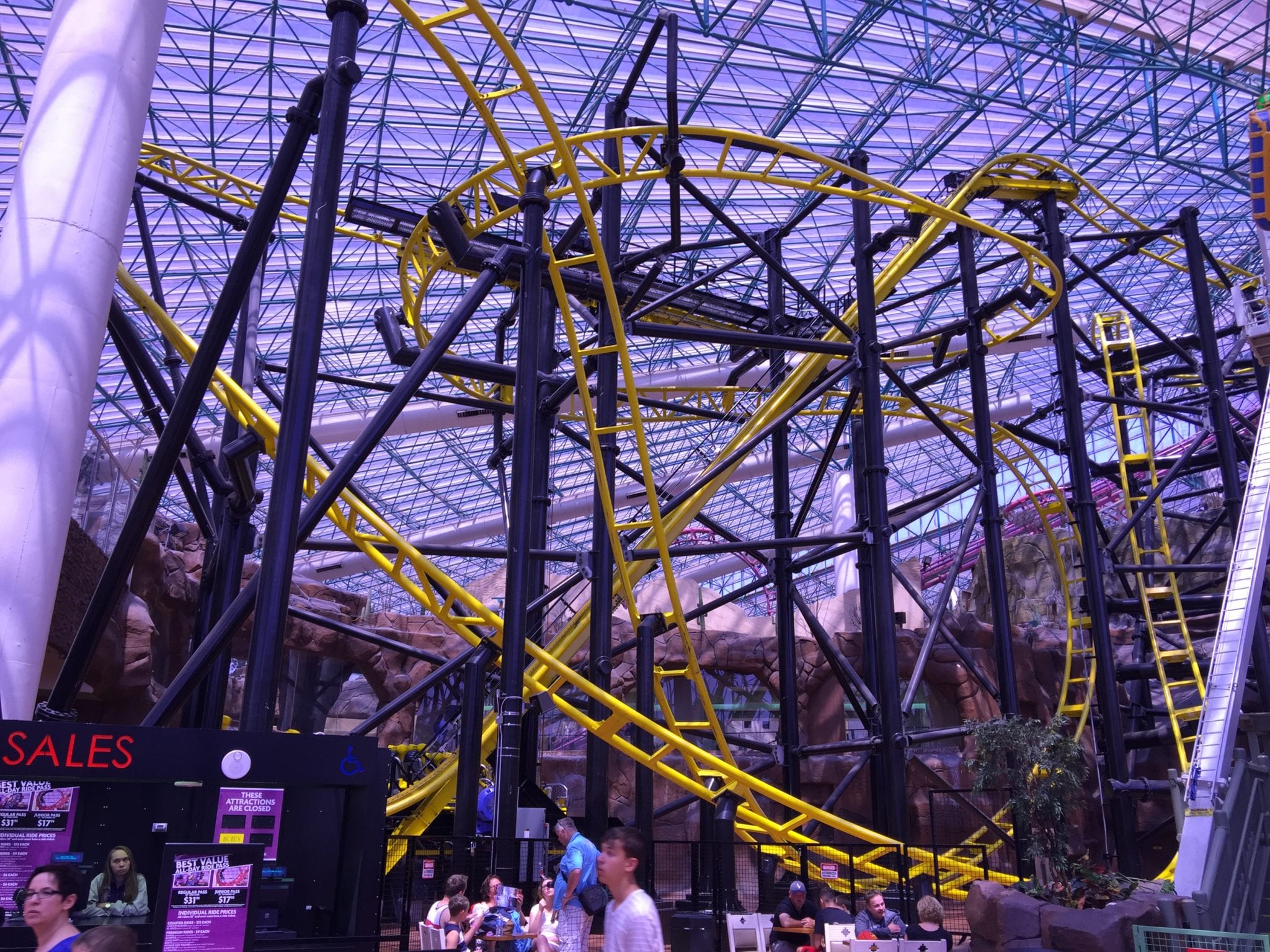 When we come home, we have a spazadoodle that rushes from person to person trying to see everyone at once. It’s a blur of fur and barking and running around.

The-Youngest was the same when we got to the Adventure Dome. Minus, you know, the fur and most of the barking.

It’s understandable. Hey, there were a lot of rides to try. Not like Disneyland. Or some of the other theme parks. But for Vegas, this was the place to be for rides.

In all the research that he’d done, never once did he figure out what to do first. Me, I would have had an itemized excel spreadsheet detailing rides, times and likelihood of me throwing up. On a scale of 1-5.

See, when I want to do something, sure I plan it out, maybe over plan might be the right word, but certainly, once I get there, I know what I’m going to do. Down to the second.

So he dragged us around the entire complex desperately trying to make a decision he couldn’t himself make.

So, in the end, we chose for him. It was that or have his brother kill him. And we chose… are you ready,?  …bumper cars.

It was a poor choice. Oh, the bumper cars could have been awesome. You drive around, smash into each other, The-Oldest can line up his brother and smash into him, The-Youngest can charge like a bull at the Stepdad and nearly shatter his spine.

Yup, good times. But for some reason, the people running the ride didn’t clear out all the excess cars. So we simply crashed into them like a pile-up on an LA freeway in the fog. And then no one moved. No one could. We were bumper to bumper and stuck.

It was the worst 3 min ride ever. Or 5 minutes. I can’t remember. But it helped The-Youngest choose the next ride. He wanted to go hardcore. No more kiddy rides. It was time for El Loco.

Being me and being old and in many ways comfortable with my life, I didn’t have any desire to be flung around on this coaster. So I declined. But the-Prettiest-Girl-in-the-World, being the best mom ever, chose to go, as did The-Oldest who has no fear of these darned things.

But here’s what happened. The ride was fast. It flung you around. It hung you upside down. It jerked you this way and jerked you that way. All at horrific speeds.

The-Prettiest-Girl-in-the-World staggered off of it holding her neck. The-Oldest danced away from the ride with the biggest smile on his face. The-Youngest, though, well, he looked like he’d seen a ghost. Or his parents have sex. Something horrific, anyway.

Thing is, that ride scared the hell out of him. As it would me. It’s why I don’t do these things. And he learned that it’s one thing to watch 3000 videos on the ride and a whole different experience actually, you know, experiencing it. Feeling the speed. Having your stomach drop as the coaster hurtles down. Having your head spin as you dangle upside down.

And, I think, hated himself for hating it.

It’s like dreaming of eating a huge plate of ice cream only to find out that eating it makes you sick.

So, after walking around with his mom for a bit, trying to explain what he was feeling and not wanting to let everyone down, we decided to do our own thing. The-Oldest and I went on all the super hardcore rides. Ok, HE went on them and I cheered him on. The-Youngest and his mom went on all the other rides. The ones designed for 9 year olds. The ones not designed to make you want to throw up.

The only hard ride I went on was the Canyon Buster coaster and it was my perfect ride. Lots of speed, which I love, lots of twists and turns, (even flipping upside down), but no big drop at the beginning which I find utterly terrifying for some reason. Only problem, one turn slammed my head to one side and my braces cut a huge hole on the inside of my cheek.

After the rides, we played arcade games. The-Oldest did amazingly well on the dancing machine, while The-Youngest wanted to gamble. First, the coin push.

Then he wanted to spin the wheel to get tickets. We finally relented and he was so excited when he won ‘the jackpot’ and got 70 tickets. 70 tickets bought him 5 jolly ranchers. He kept hearing people win. See they win here, he’d tell us.

Happy with the day, we ate hot dogs at the food court (pretty yummy, actually), and then we headed back to the room. In the end, we all had fun, even if it wasn’t the fun we thought we’d have.

The-Youngest, much to my surprise, was not all bummed out.

“Joe, did you know that the candy stores are all near New York, New York and that the roller coaster isn’t as scary as the El Loco, and that there’s a new arcade there, and the Statue of Liberty’s there, though not the real one, a smaller version, and I can get Jolly Ranchers at the candy store, except I won’t want lemon, because lemon isn’t that sweet and…”

It’s one of the things I love about that kid. He’s forever positive about the future. He took that disappointment over the roller coaster ride and put it in the past. Just like that.

And, back at the room, we finally came up with something special for The-Oldest. Something totally Vegas.