One thing that I’d not trained for was the long drive. 4 hours from Vegas to Flagstaff. OMG, my bum and back hurt after two hours. After 3, I began to get so antsy that I was like a 9-year-old without any electronics. But I still thought we might have a chance to reach the restaurant in time.

The boys, for the most part, were amazing. They spent 4 hours listening to music, most of it the sleepifying Beethoven-type classical music. Honestly, I don’t hate classical music, but let’s face, it, it isn’t always the best for staying 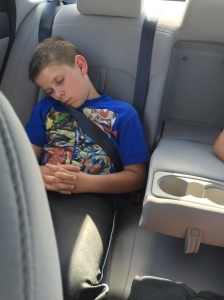 awake. Hell, it was all I could do to keep my eyes open, but that’s the music The-Oldest loved so we listened to it while The-Youngest snoozed in an adorably cute way.

However, we had to stop to save my bum and feed the boyz, so it became clear, beyond all reasonable doubt and lacking a working teleportation device, that we wouldn’t make my birthday supper appointment, so I phoned to rebook for Monday.

Ok, first I phoned to say I’d be late. Then 2 hours later, when we were on the road, our tummies full, I phoned, again, to say, um, yes, looks like we’re going to be SO late as to be having to book the next day. The person on the other end didn’t laugh but did rebook us.

At this point, The-Prettiest-Girl-in-the-World was dog-tired and just wanted to get to the hotel room, unwind a bit, and grab something nearby. She didn’t want a big feast and certainly wouldn’t have loved a lot of people singing happy birthday to her in Spanish.

With The-Prettiest-Girl-in-the-World’s perfect navigation, we found the hotel without getting massively lost. A Days Hotel. Simple. Close to the highway. As cheap as I could get and still have some basic amenities.

We checked in without breaking anything (despite the best efforts of The-Youngest who seemed possessed by a need to touch, move or otherwise play with everything in the hotel lobby.)

But then the adventures began to happen. We were helped by a very pretty young, Asian girl with white pants who couldn’t have been nicer. Of course, had she known what would happen, she might not have been so nice.

In writing terms, when everything goes right, it makes a terrible story.

So, let me introduced you to the plugged toilet.

To be fair, The-Youngest only filled it up. With an epic deposit. And when he tried to flush, it began to run over.

He didn’t cause the problem at all, but you know that feeling. That horrible feeling. The water rising. With lots of stuff in it. You want it to stop. Pray that it’ll stop. You don’t want it to overflow, not on your watch, not from something you’ve done.

I can only imagine his panic, but when the water reached the rim, he shouted for help and we came running.

As you know, there’s not much we could do, though, but pray.

And the gods were with us, it didn’t overflow. It stopped at the edge. Right. At. The. Edge.

The-Youngest apologized, afraid we’d be mad, but it wasn’t his fault, so I phoned down to get it fixed but who should appear but the pretty, young Asian girl with white pants who couldn’t have been nicer. She gripped a plunger. And had a look of great fear.

Now who among us would make a pretty young Asian girl with white pants who couldn’t have been nicer unplug a toilet?

I took the plunger, asked if she could bring some rags or used-towels in case this went very wrong and, ah, stuff spilled out onto the floor. She nodded and fled like I’d given her a reprieve from being tortured or forced to watch the entire Zoolander 2 movie.

Now being all chivalrous is fair and fine until you have to face down that toilet. With The-Oldest watching and giving advice like you probably don’t want to spill that water all over, I began.

So here’s the thing. Unplugging a toilet is a delicate operation. Plunge too hard and you’re picking stuff out of your hair and mopping up the floor. Plunge too lightly, and all you’re doing is making poo-soup. Yum.

With unbelievable skill, years of training, and not a little luck, I managed to plunge the blockage away without making a bigger mess.

Honestly, it was a miracle. The toilet was saved. All was good and right with the world.

Then we broke the in-room safe.

Not an easy thing to do.

Even harder to phone down to the desk and have the very pretty young, Asian girl with white pants who couldn’t have been nicer come up and have to fix that!

This time, it was The-Prettiest-girl-in-the-world who fixed it. I don’t know how, but it did involve a lot of banging and swearing, but in the end, she managed to get it open. I think she was one step away from using a blow torch or seeing if the local 7-11 had a stick of dynamite.

Exhausted, scared of doing anything more in the room lest we break it, we went for supper in the bar.

Yes, our 9-year-old got to go into his first bar. He wanted to order a beer. He got a hamburger instead.

Now, in the hotel, the restaurant and bar are side-by-side. I think they sat us in the bar side to a) give us a view of the TV (b), I think the very pretty young, Asian girl with white pants who couldn’t have been nicer may have called and said there’d be a family coming down in need of lots of alcohol and (c) they had a huge booth for us.

We ate without breaking anything, getting into a bar fight or having to stop the-Youngest from sneaking tastes of other people’s drinks.

Somehow we managed to have a full day while planning to do nothing.

And tomorrow, the Grand Canyon awaited. What would we break there?