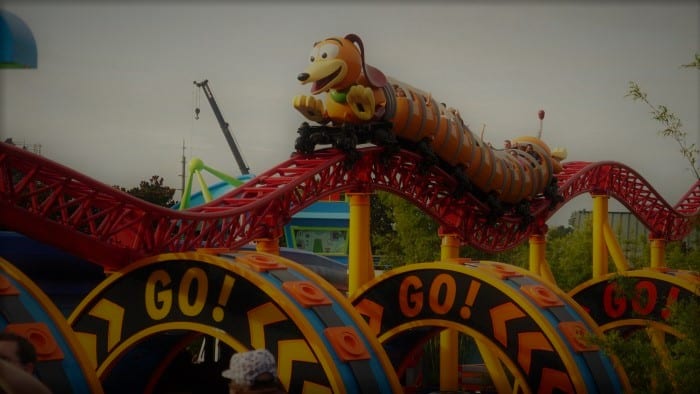 Well, every day the forecast for Disney World said, chance of showers, lightning, and thunder.

Sure, the rain wasn’t as heavy, nor was the lightning as fierce as the first night, but that rain played havoc with our plans. We wanted to see the Star Wars show, you know, the one when Ren had smiled at me, but they’d packed up by the time we arrived.

We had missed the last show by, yes, 15 min. Again. And they just didn’t cancel the show, they really did pack up the whole damn thing. By the time we got there, the entire stage and speakers and, well, everything was just gone. Like it never had existed in the first place.

Our main goal was to get to the Slinky ride before they shut THAT down. It was a gentler rollercoaster, The-Youngest told The-Prettiest-Girl-in-the-World. Easy, he told her. Kind of a kid’s ride.

But we had time for dinner. We tried the old, “do you have room for four tonight?” and they said, yes. Now the 50’s Diner was amazing, but not the best.

Luckily, when we arrived, the ride was still in operation, even though lightning flashed in the distance and rain pattered persistently down. We zipped into the Fastpass line and waited while only 3 coasters loaded up before us. That’s it.

“This..” The-Prettiest-Girl-in-the-World shouted, gripping the hand bar, her hair blown back, “Is a kid’s ride?”

We shot upwards at near warp speed then plummeted into a steep turn. “This…” The-Prettiest-Girl-in-the-World screamed, all blood draining from her face, “Is a kid’s ride??”

“Aaaaaaaaah,” she howled as we hurtled around another bend, then zoomed up and down, then up and down, again, before finally zinging around the last corner and coming to a stop. She sat there for a moment, breathing heavily, her hair blown back, her eyes wide.

Then she looked at me. I knew I would have to make sure there were no sharp objects left out in the room this night.

As we stumbled away from the Slinky Dog, The-Youngest reliving every second of the ride, The-Oldest looking bored and in need of a piano, stat, The-Prettiest-Girl-in-the-World still muttering “Not a kid’s ride,” like Rainman, the rain began to fall in thicker drops. Lightning shot through the sky above us. Thunder boomed. Everyone smart ran for cover.

A voice from heaven or somewhere said that the Fantasmic Show may be delayed due to weather,” and by ‘delayed,’ we thought they’d soon mean ‘canceled.’

Now, at this point, we could have gone to the amphitheater, sat in the rain for an hour or so for Disney World to give the final notice, but instead we thought, you know what, it’s been a great day, apart from, you know, Uncle Chris, so maybe we should end on a high and head home.

It was a good decision. Even though we had rain protection, those flashes of lightning would shut down the show. Back at the hotel, we didn’t get wet, we had AC, we could put our feet up and make a plan for the next day.

By the time we went to bed, our original plan had changed.