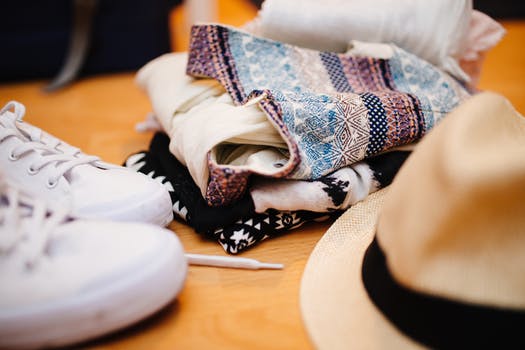 Packing Problems or Leaving It All Behind

We still had 2 great challenges to overcome in the morning. 3 if you include getting the boys up, getting their faces washed, their teeth brushed and into some form of clothes. Then it was off to one last big adventure.

The first challenge was the ongoing battle with the hotel staff over face cloths.

Every day since the day we arrived, we ran out of face cloths. Hey, do the math. 4 people, 4 showers, morning face washings and, at some point, spot scrubbing of ketchup, blood or jam off of body parts…

The 2 they left us were just not enough.

So every night I would phone down and ask for more face cloths.

Now maybe this is a weird language thing. Maybe the americans call them wash cloths, or face wash-washies or gun cloths, but every time I ordered some, I just never knew what I would get. Or, to be fair, with my braces on, they may have heard ‘faith clouds’ or ‘fade gloss’ or something like that.

One time a nice maid delivered about 10 small towels. One time, despite asking for 6, one was sent up. Another time, a harried-looking janitor gave me an armful of them (and the Prettiest-girl-in-the-world was not convinced they were that clean.) One time when we came back, we found that they had taken all of them away. All.

It was then that I began to suspect something was up. Like the maids who polished the floor to a slippery shine in order to kill me in Mazatlán, I think the maids got a good giggle over the whole face cloth thing. “Let’s see what they do when we give them small towels? They are Canadian, yes? I bet $2 they don’t say a thing.” “Ok, we didn’t’ give them anything? Everyone place their bets when they’ll notice.” “Omg, you should have seen his face when I gave him one.”

That’s ok. It took a few tries sometimes, but we got our face cloths in the end. And the Prettiest-girl-in-the-world being kind and empathetic, refused to believe my stories about the maid conspiracy and when we finally departed, she left them a nice tip for all the hard work they did on our behalf.

It’s something I would never have even thought about.

Nor did the boys either.

It’s why we need the Prettiest-girl-in-the-world with us. She is simply a nicer person.

So second problem: If anyone remembers about 400 posts ago, I mentioned Allegiant Airlines had a pretty strict baggage policy. Their biggest bag can only weigh 40lbs, but L+W+D can be an astounding 80”. I’m pretty sure if we cellophaned up the youngest, he would be qualify, but apparently they have restrictions against shipping children in the baggage compartment. Their other bags are, 9x14x22 for carry-on, and 15x7x16 for personal bags.

If we failed to meet those specs, the fines were hefty. A billion dollars or something like that.

When we left on the flight here, we barely made the limit and since then, we’d spent a whole week buying seaworld shirts, boxes of lego, rubber frogs, maps, suntan lotion, zoo cups, video games, bandages, and something stuffed in a yellow bag (And that was just my stuff!)

So we knew this trip back was going to have a lot more stuff. But, to be fair, we knew this was going to be a problem, so the night before, we went out to Target (the last ‘t’ is silent in Canada).  We bought another carry-on and then paid an extra $40 or something to add it to our Allegiant Baggage total.

However, as we packed in the morning, it became apparent that the extra bag would not be enough. We stuffed the boys’s small backpacks full of clothes and heavier things. Sure this would double their body weight but everyone was taking one for the team at this point.

We then threw out all the HBA (in my old business, that was health and beauty aids), including all the hotel shampoos and lotions and mouthwash I’d stolen over the week. We sat on the bags to make sure we could zip them shut. Then we lifted them up and did our best to eye-ball their weight (or arm-ball them?).

My best guess was the big bag weighed about 200 lbs. The others seemed fine even if the boys bags looked like airbags ready to explode.

So we repacked, and repacked, again, balancing out the weight as best we could. But the only way we’d know for sure if we were over-weight would be at the terminal (and I knew for a fact, I would be over-weight… too many hamburgers and chilli-fries.)

If we were over, though, I had a plan. I could wear about 6 pairs of underwear, two shirts, and probably stuff a couple of socks down my pants. I offered to do the latter anyway, but the Prettiest-girl-in-the-world didn’t warm to the idea.  The boys could wear extra clothes and stuff lego in their pants. The Prettiest-girl-in-the-world could fill her purse with sweaters, zoo cups and extra bras.

So, with nothing left to pack, with the room cleaned up, the vital air freshener left in the bathroom for others to use, the used face-cloths stacked neatly, if somewhat damply, on the side of the tub, we gave the room one last tour, then left.

The youngest – being in charge of elevator button pushing on this trip –  pressed the down button one last time.

Then we settled up and

lugged our luggage to the car. I have no idea how I fit it all in the trunk, but I did. Even the oldest looked impressed. The youngest said he could have done it faster.

As the sun came out, bright and glorious, we drove off to Balboa Park to see one museum for the boys and one for, well, let’s say it was the boys, too (but really, it was for me.)

The only issue now was would we all have enough energy to do Balboa or would the 6 days of non-stop tripping take its toll on us?