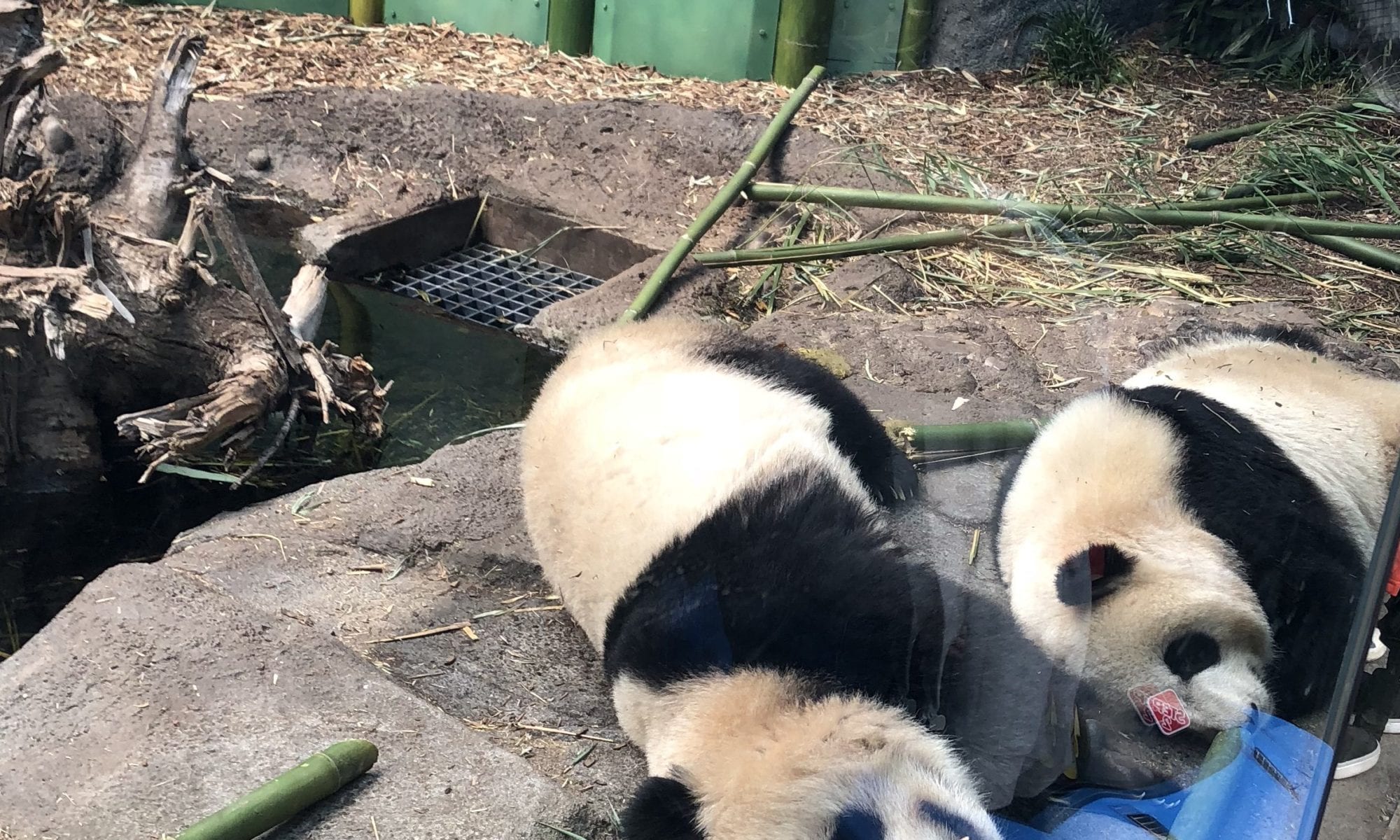 The Truth About Pandas.

We had a choice to make early in the planning stage. The Calgary Zoo or the Calaway Amusement Park. The-Youngest argued for the park, since it had, you know, rides and cotton candy and rides and pop and rollercoasters and popcorn and more rides.

But since we were going to the West Edmonton Mall, and they had rides and waterslides and rollercoasters, it was decided to see the zoo. The zoo had pandas, and pandas trump terrifying machines of death every time.

We confirmed the location of the pandas with the ticket guy who seemed vaguely amused that we thought they’d moved them, but then again pandas are known for their blinding speed and ability to Tarzan from tree to tree so who knows, right?

We speed-marched to the panda exhibit like housewives trying to wiggle walk-off 20lbs in one journey. All along the way, there were posters of pandas looking cute. We weren’t deceived, we knew they were ferocious killers that took down mammoths once upon a time. They were known to move faster than cheetahs, and make homes from rocks they carved from the mountains.

Ok, all we really knew is that they were super cute and ate shoots and leaves. We’d seen pictures. And watched videos. Seems they did a lot of looking cute, a lot of munching on things and, every so often, they’d lumber around their enclosure like me with a foot cramp.

To our surprise, there were no line-ups and we got to go right in.

It was then we found out the real truth about pandas. Like me, also super cute, they like to nap. A lot. Seems it’s their favourite thing to do.

So, we got to see one napping on a big rock. She had managed to lay in such a way that it looked like one bad shift in her dreams and she’d fall off the rock and into the water. There are a lot of videos of pandas sleep-falling off of trees, rocks, and buildings. It could be that they are not the smartest animals in the kingdom.

I waited for her to fall off, but she didn’t shift a bit, happy to be inside, and warm and with her children safe and sound in another room. Her children were likewise asleep, happy to snuggle with each other. They weren’t as white and black as I thought they’d be, more a muddy white and a greyish-black, but their cuteness was undeniable. I waited my turn with all the other children who wanted to get close and take a picture, then snapped a few of them cuddled up.

The biggest difference between the older generation and the younger could be summed up here. I waited for my turn. Kids pushed their way in (and I’m not talking 5-year-olds who have an excuse for bad manners) but those horrible teenagers, the ones without social skills, no understanding of lines and raised by parents who thought that being their friend was the same as, you know, parenting.

No matter. I snapped a few pictures of the cuties, then took a bit of time to actually watch the pandas with my own eyes while teenagers cycled past the glass taking selfies. I took in the smell, which wasn’t that great, the sounds (only one seemed to snore) and wondered why they’d chosen those spots to snooze. The kids took a picture and moved on to something else.

To be fair, the boys couldn’t really see the point of watching pandas sleeping either, but at least they didn’t just selfie the darned things.

As for the pandas, well, they really needed to do better. I’ll be writing a letter to their leader in China. They need to be more active and entertaining. Cute is not good enough.

But that was the great panda adventure.

The rest of the zoo, however, didn’t disappoint.

2 Replies to “Will the Pandas Be Awesome at the Calgary Zoo?”